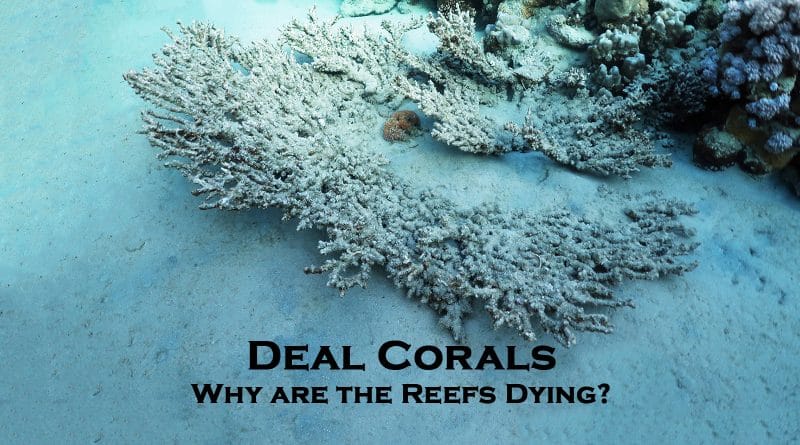 Healthy coral is usually brightly colored and vital to life in the oceans and on land; however, dying, or dead corals are known as “bleached” are white in color. Since it is a living combination of plants and animals, they die when denied the necessary nutrients to thrive. With the rising sea temperatures and other types of climate changes as well as overfishing, and irresponsible tourism – beautiful life-giving corals start bleaching and dying very quickly.

Coral isn’t a plant nor stone; coral is a group of animals!

Coral is very important in our waters and also beautiful to look at, but not many know what is coral exactly and think it is some kind of plant, or made of stone. In fact, it is a delicate, yet complex, combination of animals (polyps) and plants (algae).

Polyps have a close relationship with algae and together they create small calcium housings that are layered on top of each other. Polyps secrete a shell of limestone (calcium carbonate) that attached to dead shells of other polyps.

However, unlike rock or stone, polyps are alive and unlike plants, coral is unable to make their own food. Polyps are invertebrate and can be the size of a pinhead or grow up to a foot long. The tiny creatures usually stay protected inside their homes and feed during the nighttime hours.

Some of the best places to go snorkeling and to view spectacular reefs is Australia, Indonesia, the United States of America (Hawaii and Florida specifically), The Caribbean and the Red Sea in Africa.

How does coral die and why?

Polyps naturally grow and die, and this process is continuously repeated. This process creates the foundation of coral reefs and aids in giving it their amazing coloration and unique shape. Due to this continuous cycle, the polyp colonies can survive for many years.

However, these ecosystems are very sensitive and started to die at an expeditious rate in the past few years. The list of factors that impacts reefs is long, the most importants are rising sea temperatures, acidification, carbon dioxide sinking, algal bloom.

For instance, when the ocean’s temperature changes to warmer than usual, coral tends to expel the algae that live within the tissue. Without algae, polyps turn pale – this process is called “coral bleaching” and usually result in death.

Human interaction is a major reason for dead corals (boats and nets scrapping the bottom of the seafloor, pollution, digging of canals, blast fishing, mining and human alteration of coastlines.

Healthy coral has a lovely olive green, yellow, blue, pink and dark or light brown coloring. The pigmentation is said to have protective qualities against sunlight and other forms of damaging stress factors. When a coral is dying, it loses its color, becomes white.

Coral that is healthy and vital provides shelter to many different types of marine life. Healthy reefs are important to the entire ecosystem because it is also a source of nutrition. In addition to being a food source and shelter, these systems keep our coastlines protected from damaging storms and erosion, moreover are important for the tourism sector too since they attract water sports lovers, and like this, they provide a livelihood for local people.

On the other hand, old, diseased, and stressed coral is broken down, and usually void of color. However, dead coral on the beach is not useless as it becomes part of the beautiful sand on coastal beaches. Try not to mistake dead coral for a stone or rock.

Can a dead coral come back to life?

Like a possum, some may only appear dead when exposed to warm water. As a survival technique, polyps will reduce in size and retreat into their hard skeleton for safety. Once the weather conditions stabilize and temperatures return to normal, polyps will eventually come out of their shell and their tentacles will regrow.

But if the climate continues to shift, this type of survival strategy may not help in the near future. When algae leave coral due to rising sea temperatures, it becomes bleached and may die.

However, if algae return quickly, colonies may come back to life. But, if bleached coral remains like that for a long period of time, only the skeleton remains and finally, the dead coral pieces will make their way onto land – to beautify the beach.

How many corals are dead?

Time is limited for coral reefs worldwide. The Great Barrier Reef is the largest reef in the entire world and one-third of the almost 3,900 smaller reefs that make up this magnificent system went through a devastating die-off due to a heat wave that occurred in the year 2016.

In the year 2017, the same system underwent another catastrophic event. In less than two years, more than 50% of the system became dead. The remaining parts of the Great Barrier Reef are still vulnerable because the climate is shifting quicker than reef can keep up with.

A coral reef protects the land from surging waters and one-quarter of fish spend a portion of their lives in reefs. Without coral, there could be reefs could have a devastating consequence – in the sea and on land. At the current rate, many reefs with algae could be destroyed on or around the year 2050, due to rising sea temperatures and the other above-mentioned factors.

Tip: if you have time make sure to watch the Netflix documentary, Chasing Coral that explains the bleaching phenomena more deeply.

Can you take dead coral from the beach?

Just because you are able to do something, doesn’t mean that you should do it. Dead coral is instrumental in making the sand that we enjoy while spending a day at the beach. Coral should only be admired and appreciated and not removed from its habitat. As the saying goes “take your memories and leave only your footprints in the sand.”

As a general rule, do not remove dead coral pieces from the beach as souvenirs. In many locations, collecting coral is strictly prohibited and you might get a hefty fine.

The same rule applies of course to living corals too. Never break off any of the coral to take home with you as a souvenir. You might think you are breaking off a piece of stone, but you are actually removing tiny animals that can’t survive outside of the location.

Corals need you – 5 things to do to protect reefs

Scientists all around the globe are constantly trying to save coral by identifying which ones are resistant to acid and/or heat. They are discovering ways to rapidly regrow healthy coral and reduce coral bleaching.

Although ongoing research and scientific progress is promising, it is slow. Since humans are one of the biggest threats to reefs around the world, we have to take personal actions too. Here we give some ideas how you can help.

It became a hot topic lately that sunscreens contain chemicals that kill coral, but if it comes to sun protection, choose only eco-friendly sunscreen that doesn’t cause damage to the coral, or wear a full body rash guard that will protect you from UV rays.

To learn more in this topic, read what ingredients are dangerous in sun care products and what reef safe sunscreen brands we recommend buying.

Corals are fragile living creatures; therefore, do not touch, stand on, or kick them as this will cause damage and even death. A tiny touch of the finger can actually cause damage to the whole system, so stick to pictures and don’t touch the coral itself.

When swimming around coral, be very careful of your flippers. They can accidentally smack into the reef and cause serious damage. Swim with care and keep track of your surroundings to ensure you’re snorkeling or diving responsibly

Tip: read our post on how to be a responsible snorkeler!

Debris that comes from ships is washed out to the sea by storm drains, streams and/or rivers, killing coral reefs. Rubber, metal, glass, and plastic such as bags, balloons, and fishing lines are especially dangerous to all types of marine life so be careful and reduce plastic usage on the beach. Here we share some easy tips on how to use less plastic, make sure to check them!

Many destinations offer superb offshore snorkeling, but some places are only accessible by boat so we can achieve big changes if we choose tours that operate following basic but essential rules like not anchoring on the reef and not feeding, chasing sea creatures.

However, there is no worldwide standard yet what makes a diving or snorkeling tour operator eco-friendly, but make your research and sign up with a person or company that respects marine life.

Educate yourself, support charities and NGOs

It is always a good idea to educate yourself on all things coral. Get a few marine life books and learn about the creatures you see while snorkeling or diving so you will understand how they live. Also, support charities that are focused on keeping the ocean clean and safe and do reef restoration. Small things can make a huge difference!