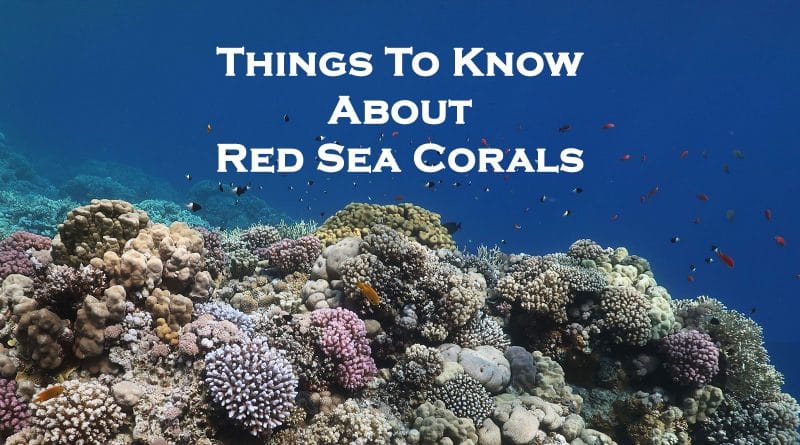 There’s no travel destination on Earth like the Red Sea. A seawater inlet that is part of the Indian Ocean, this unique body of water between Africa and Asia with extensive shallow shelves is known for its extremely rich marine life and abundant reefs that are unlike others around the world for several reasons. Take a look at these interesting Red Sea coral reef facts to discover why!

Corals around the globe are in danger due to ocean warming and acidification. According to scientists, the coral reefs of the Red Sea appear to be more resilient against rising sea temperatures than most others.

The Red Sea ecosystem houses one of the longest continuously living reefs in the world. Scientists note that the hard coral species found in the northernmost portion of the sea that extends into the Gulf of Aqaba have an especially high tolerance for rapidly warming seawater that would normally cause severe coral bleaching.

Portions of the Red Sea may be essential for the survival of marine life in the face of rising temperatures. The unique biological mechanisms that allow Red Sea corals to be resilient are currently being studied to see if the environment can be replicated, but according to scientists, these “super corals” may create a model for restoration once climate-change stress is mitigated.

The conservation community is so optimistic about the Red Sea’s role that the Great Fringing Reef of the Red Sea in Egypt has been named a Hope Spot by Mission Blue.

The Red Sea is one of the saltiest bodies of water in the world! A combination of high evaporation, heavy winds, and limited fresh-water inflow leaves the sea with 40% salinity. This salty environment is perfect to thrive for reef-building corals that’s why they are able to build massive structures in the forms of fringing reefs and barrier reefs.

Several countries work together to protect the area’s reefs

Sharing its sacred marine waters with Egypt, Jordan, Israel, Saudi Arabia, Yemen, Somalia, Sudan, Eritrea, and Djibouti, the Red Sea is one of the world’s most important bodies of water due to its geopolitical position and environmental value.

The above-mentioned countries are members of the PERSGA (Regional Organization for the Conservation of the Environment of the Red Sea and Gulf of Aden) and have teams that constantly monitor the health of the area’s coral reefs.

One of the most interesting facts about the Red Sea that is has roughly four times the coral diversity of the Caribbean! Its reefs present an incredible variety within a space that only covers 174,000 square miles.

Roughly 300 species of hard coral have been recorded in this sea. Nearly 200 of them are concentrated along the Egyptian coast.

These reefs are thousands of years old

Portions of reef peppering the Red Sea Coast date back to biblical times. Coral is the longest-living animal on Earth. However, the reefs in the Red Sea break records. While it’s not uncommon to find reefs around the world that are thousands of years old, these reefs date back to 5000-7000 years ago.

Certain fish species only live in the Red Sea

There are more than 1,000 different species of fish have been identified within this body of water. These colorful creatures rely on corals to raise their juvenile fish to adulthood.

If the corals of the Red Sea were to disappear, entire species would disappear. That’s because roughly 10% of the fish that call these enchanted waters home aren’t found anywhere else on the planet!

Creatures ranging from the smallest of plankton to massive sea mammals depend on Red Sea corals to fuel the circle of life. These waters are home to some truly majestic marine biodiversity.

Reefs are a food source for sea turtles

Out of the world’s seven marine turtle species, five can be found in the Red Sea waters. Among the Red Sea turtles, one species, the critically endangered hawksbill sea turtle depends entirely on coral reefs for survival.

Easily distinguished due to their distinctive pattern of overlapping shell scales, these beauties feed on sea sponges growing on corals using their narrow beaks.

The region offers top conditions for diving and snorkeling

The Red Sea attracts snorkelers and divers from all over the world to witness its healthy and vibrant marine life. The coastline, especially the Coast of Egypt features some of the earth’s most popular diving and snorkeling sites.

For instance, the northern region around Sharm El-Sheikh has protected national park reefs (Ras Mohammed National Park) offering opportunities for both beginner and expert underwater explorers. There are also many world-famous wrecks to dive including the famed SS Thistlegorm cargo steamship.

The southern region is known to allow divers and snorkelers to encounter magnificent creatures such as huge sea turtles, sharks, manta rays and the rare dugongs of Marsa Alam. No matter what area you choose to travel to when you wish to dive or snorkel in Egypt, underwater wonders are guaranteed!

The Red Sea is heaven for underwater photographers

Thanks to ultra-clean waters, and extremely diverse marine life, the Red Sea coral reefs provide some of the best conditions for underwater photography. With a variety of sea creatures living on them from tiny nudibranchs, tube worms and miniature fish as well as big animals like whale sharks and manta rays, these waters have a lot to offer for both macro and wild-angle photographers!

It is a year-round travel destination

The Red Sea is warm enough to enjoy water activities and explore its reefs all year long. The lowest water temperature is 70-72 degrees Fahrenheit (21.1-22.2 °C) throughout December and January.

During the summer months, the water temperature reaches an average of 82-84 degrees Fahrenheit (27.8-28.8 °C). In addition, the region experiences year-round sunshine which makes it an excellent vacation destination no matter the season.

While the Red Sea coral reefs are extremely resilient to climate change and environmental challenges, their protection should not be neglected. As part of conservation efforts, human activities that include hunting wildlife are prohibited in most coastal regions. In areas where water activities are practiced, mooring buoys have been placed to prevent damage from boat anchors.

Us, tourists should aim to protect the natural environment too; while snorkeling or diving, make sure not to harm the underwater world and keep the following in mind:

Why is the Red Sea coral reef so important?

Thanks to the fact that its corals are extremely climate-tolerant, scientists think that the Great Fringing Reef of the Red Sea can survive rising temperatures, provide shelter for marine life, save species from extinction and therefore can have a key role in repopulating the world’s other reefs.

What types of corals are in the Red Sea?

Around 300 hard and soft coral species can be found in the Red Sea. The two most common species are the Porites (Finger corals) and Acropora (staghorn, elkhorn and table corals) stony corals.

Why is the Red Sea coral reef so special?

Corals in the Red Sea are unusually tolerant against extreme conditions such as heat, high water temperatures and salinity. These unique features make the Red Sea corals likely to withstand climate and environmental challenges better than reefs in other parts of the world.

How healthy is the Red Sea coral reef?

Despite climate change-related challenges, the Red Sea reefs are considered generally healthy compared to others in the world. There are heavily damaged areas due to unregulated coastal development, but no mass bleaching was reported so far.