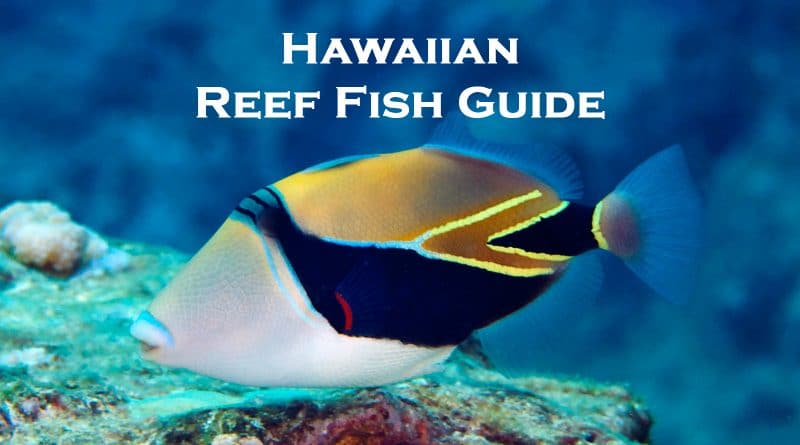 Hawaii’s waters are teeming with marine life and snorkeling is the best way to explore the colorful underwater world. If you always wanted to know what fish are found in Hawaii, read this list that features the 12 Hawaiian fish names and pictures so on your next snorkeling vacation you will easily identify the most common species!

Trumpetfish (locally called Nunu) is probably one of the most interesting Hawaiian Fish name you find in this list. These weird species look completely different than most common Hawaiian Fish. Trumpetfish have a long body (like a trumpet) and they are so thin that from certain angles, they are not even visible in the water.

Their normal color is gray, but can change their color to green and even yellow and add horizontal and vertical stripes to blend in with the environment. Usually they are not shy, just hang around in the water hunting peacefully.

Known as Kihikihi in Hawaii, Morish Idol is a species that most people know from the animated sea movie Finding Nemo.

With a pretty large size (they grow over 8 inches) and wide, vertical black, yellow and white stripes, tall dorsal fin and tapered nose, Morish Idol belongs to the most common and easily recognizable Hawaiian reef fish and it is almost guaranteed that you will see some while snorkeling in any Hawaiian Island.

Besides their colorful appearance, they are easily recognizable from the way how they swim: they using their fins on their belly and back to push themselves forward in the water.

Divers and snorkelers need to be careful with reef triggerfish. They are usually shy and swim quickly away, but when protecting their nest, they become aggressive and can bite.

The fun fact is that the local name of this Hawaaiin Reef Fish means ‘fish with nose like a pig’. This is because when they are stressed, they can make pig-like sounds.

The invasive Lionfish are probably those species divers and snorkelers have a love-and-hate relationship with. They are beautiful but at certain places are very harmful to the local ecosystems. In Hawaii, these species, that are called dragonfly fish (honu pinao) are native and are a natural part of the reefs.

In Hawaii, there are red and green lionfish. The green ones are smaller, grow about 6 inch long, common in shallow waters, while the red ones are a bit bigger, 7-8 inch long and usually live in deeper waters. Usually lionfish become active after sunset, but there is a chance to see them during the day too.

No matter what type of lionfish you see, note that never touch them. They have poisonous spines. When they are approached, they flare out and rotate their fins.

If you love Greek history, then Paku’iku’i, Achilles Tang can be your favorite Hawaiian reef fish since this species got its name after Achilles, the Greek warrior.

Snorkelers can find this species in shallow reefs. Achilles Tangs are easily recognizable: they are larger than most reef fish, on their dark body there is an orange teardrop patch before the tail and also a bright orange bar runs along the tail.

If you search for Hawaiian Fish names and pictures, you will probably notice that there are always bright yellow fish on the images. These species, Yellow tangs (Lau’ipala) are the fish that are commonly used to advertise snorkeling in Hawaii. Also, this species can be familiar from Finding Nemo too for its role Bubbles.

The dish-shaped Yellow tangs usually swim in large schools. And the best is, that when you see Yellow Tangs, there is a high chance to see Green See Turtles too since Yellow Tangs use to clean the shells of this turtle species.

There are different Butterflyfish species in the Hawaiian waters. They belong to the most typical reef fish.

This species, the Longnose Butterflyfish are not too big, but are easy to identify from their very long nose, yellow-black mask and black spot beneath the tail. And not only their nose, but also their Hawaiian name is so long. They are called lauwiliwilinukunukuoi’oi, which is the longest known fish name in Hawaii!

Tip: Should you wish to see these beautiful fish in real life too, start planning your Hawaii vacation now, here are our island-specific guides to help:
Where to snorkel in Maui
Big Island snorkeling spots
Snorkeling in Kauai
Oahu snorkel guide

Another common reef fish species, Raccoon Butterflyfish -kīkākapu- live in a huge number on the Hawaiian reefs. They are named for their raccoon-like black face mask.

Their body is yellow and black, with a white headband and black stripes along the side and a white headband. Raccoon Butterflyfish are usually seen in pairs but even in shoals of hundreds up to depth of 60ft/18m.

The colorful parrotfish have an important role in the underwater ecosystem. They clean the corals and create beach-building sand also as they poop, so they are not only one of the most beautiful Hawaiian Reef Fish Species, but their presence is essential on healthy reefs.

The native Hawaiian Parrotfish (Uhu) is orange with purple fins, while the Bullethead is rainbow-colored. An interesting parrotfish fact is that the males live with several females. When the male dies, the alpha of the females becomes the male by switching sex.

If you’ve ever heard that strange, rasping sound while snorkeling, that is when parrotfish crunching up and pulverizing the coral pieces with their razor-sharp teeth.

This Hawaaian reef fish has an interesting story. Originally the Hawaii Government brought this species to Hawaii to create an additional food source for the population, but it turned out that eating because their flesh might have a high concentration of ciguatera which is a neurotoxin found in marine algae species snappers eat.

Because of the fact that eating snappers can make people sick, fishermen stopped catching them so their population exploded. And although they are beautiful, they can crowd out native species and cause problems in the marine ecosystem in the future.

Tip: if you want to learn more about marine species, get a fish identification book!

When looking for interesting species while snorkeling or diving in Hawaii, don’t forget to look among the corals too since surprisingly, not all fish are swimming, some of them are just sitting on the corals.

The weird-looking Freckeled Hawkfish (Hilu piliko’a) found lying on the corals on its pectoral fins. The juveniles are usally white and brownish, while the adults can be pink or green, or even burgundy-yellow, in all cases with red freckles.

A deep red colored, large-eyed fish with bluish-whitish stripes and big eyes, this is Ala’ihi (Squirrelfish), another most commonly seen reef fish in Hawaii. They are endemic species, meaning that only found in Hawaiian waters.

Although they are common, not that easy to find since usually Squirrelfish like resting in quiet, dark places, holes and caves during the day and are active at night, this is why their eyes are so big.