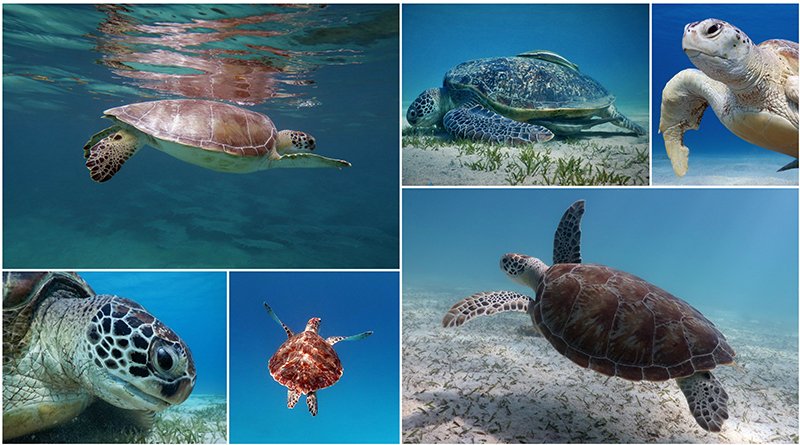 We know you love turtles and you often ask us where to go to snorkel with them?! Therefore we decided to make a Top list featuring 5 countries we found the best for swimming with sea turtles. Don’ forget to read the „how to snorkel with turtles” part too!

The best places for Swimming with sea turtles

Based on our own experience (which means we really visited the places and saw turtles), so far we found these countries/places the best for snorkeling with turtles:

Turtles can be found all over the Red Sea, so wherever you stay, you have a chance to see them. 4 turtle species live in the Egyptian Red Sea: Green, Hawksbill, Leatherback and Olive-ridley. Snorkelers and divers usually meet Hawskbill (which is critically endangered) or Green turtles (endangered) that nest and feed close to coasts. The other two species prefer to stay out in the open sea.

We met turtles everywhere we stayed in Egypt, but there are some special places where swimming with sea turtles is almost guaranteed. Marsa Alam is definitely one of the best place to see turtles! The area is less visited by tourists than Hurghada or Sharm el Sheikh. The marine life is more untouched and you can see dugongs too!

You can spot turtles while snorkeling alongside the reefs too, but better to seek them on special places! The best places for snorkeling with turtles in Marsa Alam are Marsa Mubarak and Abu Dabbab. These sheltered bays host giant sea turtles that feed on sea grass that grows on the sandy sea bottom!

Turtles are present everywhere in Thailand, but we recommend going to Koh Tao which is often called „Turtle Island”. Guess why? The island is an important breeding ground for Hawksbill and Green turtles. The development of tourism has negatively impacted the health of these grounds, but still, there is a big turtle population.

Where to see turtles in Koh Tao? Well, all around the island! The best places are Sai Daeng Beach, Sai Nuan Beach, Sharks Bay and Jansom Bay, we have seen the most turtles at these beaches. This little, lovely island offers great snorkeling with sharks too! If you are lucky, you might spot a whale shark too!

The warm Caribbean Sea around the ABC Islands –Aruba, Bonaire, Curacao– host different turtle species. Aruba’s shores are a favorite nesting place for the Leatherback, Hawksbill, Green, and Loggerhead species. They are present all around the island, but due to constant refreshing trade winds blowing from northeast and southeast, snorkeling is recommended on the east and west side only.

The best beaches in Aruba for snorkeling with sea turtles according to our personal experience: Boca Catalina, Malmok, Arashi, Mangel Halto and Baby Beach.

Mexico is an important turtle nesting area. 6 out of the world’s 7 species nest along its thousands of miles of coastline (Hawksbill, Green, Olive Ridley, Loggerhead, Kemps’s Ridley and Leatherback). You have a chance to see turtles almost everywhere in Mexico, but there are some special places with a bigger population.

The best place is Akumal Turtle Bay close to Playa Del Carmen which is a shallow, secluded beach with the nearby reef, home to different turtle species. Since it is now a marine protected area, there are some rules to follow if you want to go swimming with sea turtles in Akumal, check out our detailed post for info and photos!

During a stay in the Maldives it is highly likely that you will spot a few sea turtles whilst swimming, diving or snorkeling in the crystal clear waters around your island. 5 of the 7 species of sea turtles in the world live in the waters around the Maldives. The most frequently seen ones the Green and Hawksbill turtles.

While swimming with sea turtles in the Maldives, you will notice they are not shy, in fact, they usually ignore people or even becoming a little inquisitive – Hawksbills use to try and nibble camera lenses. Usually, they can be found in the shallow lagoon areas around the islands, peacefully feeding on seagrass.

All sea turtles are endangered worldwide. The main hazards are caused by human behavior like injuries from boat propellers, being caught in fishing nets, and pollution. Plastic pollution in our waters is a danger that animals can’t avoid. Floating plastic looks like jellyfish in the sea, turtles often mistake them and eat. Don’t litter, collect trash from the beach and while snorkeling too!

Coastal development is threatening turtle nesting grounds. Female sea turtles always return to the same beach to lay their eggs, so I think there is no need to explain that they can’t successfully lay them if the beach does not exist anymore, covered with concrete or it is under construction. Luckily there are more and more voluntary organizations that monitor nesting turtles, protect their eggs and help the baby turtles to make it to the sea.

Climate change is a serious hazard too! Rising temperatures resulting in a greater proportion of female turtle births. Warmer sand means quicker gestation periods and more female births, causing the imbalance of turtle populations.
Protect sea turtles and do your best for the environment!

Snorkeling with turtles – What to do and what not

Swimming with sea turtles is not a show like sadly many irresponsible people and tour operators think. Turtle observation is a way to adore to nature’s beauty and to understand these peaceful creatures. Always show respect towards marine life! Never attempt to reach out, touch, chase, ride, harass, feed or otherwise disrupt the natural behavior, be a responsible snorkeler! Don’t swim to close to turtles, always leave enough space for them in case they want to swim away. Educate others too! Be the change you want to see in the world!

Want to read more articles about sea turtles? Choose from the followings:

The 10 Best coral reefs around the world