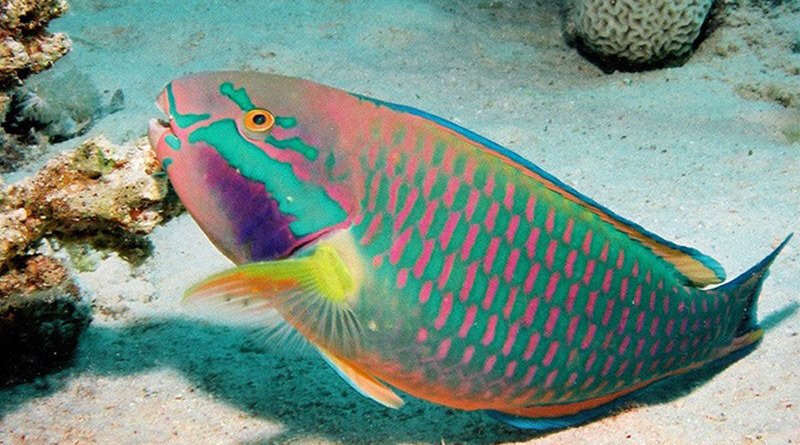 The reef saver parrotfish, these colorful tropical species are not only beautiful but play an important role in keeping marine ecosystems healthy. Learn more about them and read why parrotfish and parrotfish poop are so important!

Where to see reef saver parrotfish

Parrotfish are one of the most known tropical fish. There are over 80 species living in tropical and subtropical oceans throughout the world. Thanks to their shallow water presence, they can be observed easily while snorkeling. Interesting fact is that than the Mediterranean Parrotfish is not so colorful than the rainbow Parrotfish living on the Red Sea coral reefs.

The European species are rather brownish with yellow and grey spots, this is how they match the best to the environment colors. They live mainly in the Mediterranean Sea but also around Portugal, Azores, Canary Islands all the way to Senegal. The largest parrotfish population lives in the Indo- Pacific. Their average adult size is 30-50 cm. The biggest one, the Green Humphead Parrotfish can reach up to 1.3 meters.

If you are watching the parrotfish, you could think these lazy guys just eating all day long! But in fact, the reef saver parrotfish are working for keeping underwater ecosystems healthy and balanced. While feeding, they are continuously cleaning the coral reefs as well as building up beaches. Let’s talk more about this interesting process!

Tip: are you interested in marine biology? Read how many arms do starfish have and learn interesting facts about Christmas Tree Worms!

What do parrotfish eat?

Their diet consists of mainly algae, seaweed as well as invertebrates like zooplankton, bacteria, and detritus. This means that parrotfish feed on organisms that might overgrow and kill corals without the presence of these fish. Only a few larger species feed extensively on corals like the Green Humphead Parrotfish. In the past, scientists were worrying that parrotfish can damage reefs by breaking off living corals.

But studies proved that overall less than 1% of parrotfish eat healthy corals while the rest seeks algae-covered surfaces only to feed. Ultimately, the damage that species feeding on living corals is far less than the benefit that algae-eating reef saver parrotfish provide. Their importance is inestimable in the Caribbean too where they also help to protect corals from fast-growing sea sponges that might cause extensive damage.

To be able to crunch up corals all day long, parrotfish teeth must be really strong. To get the algae from the small coral chunk, they need a powerful bite to pulverize it. The colorful rainbow parrotfish have a unique teeth structure similar to sharks. They have more than 1000 sharp teeth arranged in approx. 15 rows that are growing continuously.

Parrotfish have one of the hardest teeth amongst marine creatures surrounded by bone that forms a solid beak. Moreover, each one is cemented to all of the other teeth. The inner structure of the parrotfish teeth are also interesting. Fluorapatite crystals are joining each other creating a complex fiber nanostructure giving the teeth extreme stiffness and durability. This structure is so unique and powerful that even designers study it to get ideas on how to invent more durable materials.

Sandy beaches are made of parrotfish poop

What would you feel if I tell you that you are walking on parrotfish poop on the world most beautiful white-sandy beaches? Well, this is the truth!

The reef saver parrotfish are not only cleaning the corals from algae but also have a role in providing sand to build and maintain coral reef islands. After the parrotfish digest the edible algae and microorganisms from the tiny coral piece he broke off, the pulverized inedible parts they excrete as white limestone sand. This white coral sand after will be washed off on land building that breath-taking white sandy beaches of the Maldives coral islands for example.

The Green Humphead Parrotfish can produce 90-100 kg sand per year but smaller species also almost 250 grams daily. Researchers say that coral reef islands are among the most vulnerable landforms to climate change and especially to future sea-level rise. Studies demonstrate the critical link that exists between the ecology of the reefs that surround these islands and the processes of sand supply. With these facts in mind, it is not a question anymore that parrotfish are one of the most important species on coral reefs!

Former studies that investigated Caribbean reefs pinpointed interesting results. Marine biologists studied more than 90 reefs around Jamaica and the Virgin Islands and stated that more than 50 % of the corals disappeared since the 1970s. Firstly, they thought the main reason is the climate change. But long-term monitoring proved that the most important factor is in the coral destruction that there are not enough reef cleaner species (including reef saver parrotfish) in the region.

For example, the parrotfish population are considered healthy in the Gulf of Mexico and on Aruba coral reefs. The reef saver parrotfish have a key role to keep the coral clean and healthy. If there are not enough parrotfish around a reef, the algae and the seaweed simply kill the corals.

How to save parrotfish?

Keeping marine ecosystems healthy is a complex topic. It includes dealing with rising sea temperatures, acidification, plastic pollution and protecting marine species that have a crucial role in maintaining the balance of the reefs. Parrotfish have a juicy meat and served all over the world for long time. But by now, due to overfishing, the reef saver parrotfish population is declining worldwide. Healthy parrotfish populations not only support the balance of the vibrant coral reefs and but also the livelihood of thousands of people.

Campaigns all over the world lobby for adding the parrotfish to the protected list and urge strict regulation on fishing and parrotfish hunting. Moreover, education also plays a key a role. Teaching fishermen to hunt for other species that are also edible but dangerous for the marine ecosystems like the invasive lionfish might help to stop the decrease of the population.