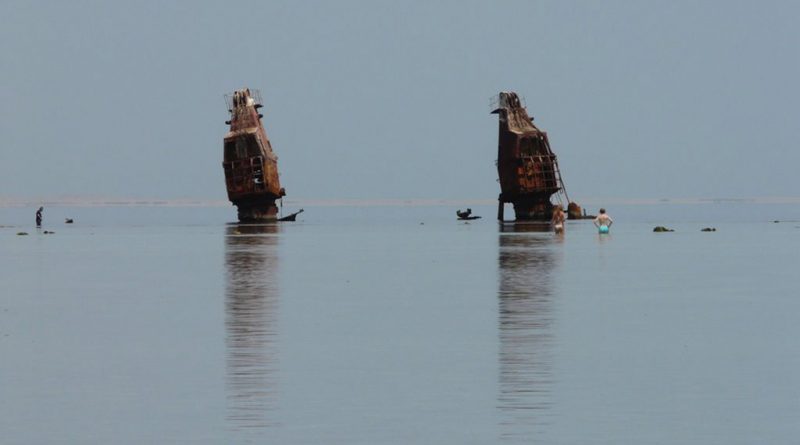 The Million Hope Shipwreck is the Red Sea’s biggest shipwreck with its 175 m length. This majestic vessel sank in 1996 after hit the reef in the strait at Nabq Bay in Sharm el Sheikh creating an interesting dive site and available for snorkeling tours as well.

How to get to Million Hope Shipwreck?

If you stay in the Jaz Mirabel Hotel, you can get to the wreck from the hotel’s recently finished wooden jetty. It is possible to use the pier for non-hotel guests too, in this case, you need to pay a little fee (approx. 10 USD but it is always changing). Ask your tour operator or snorkeling trip organizers for more information.

The shipwreck is visible from the shore as well since the superstructure is out of the water. With its maximum depth of 22 meters at the rear, Million Hope is an easy wreck-dive if the sea conditions allow the dive. A big part of the ship’s body lies in less than 10 meters deep making the shipwreck visible for snorkelers as well. This huge shipwreck is definitely one of Sharm el Sheikh best snorkeling spots and shouldn’t be missed out not-to-miss for those who love exploring special places.

Tip: If you plan a Million Hope Shipwreck snorkeling tour, always check the weather and wind forecast! The Nabq Bay in Sharm el Sheikh is one of the windiest areas and the jetties are often closed due to strong wind and rough seas. Million Hope Shipwreck snorkeling is possible only when the sea is completely flat and there is no or very little wind. Make sure to keep a safe distance from the wreck while swimming around.

If you need more information on the Red Sea’s best snorkeling destinations read our where to snorkel in Egypt guide!

The ship had several names during her lifetime before being purchased by the Aksonas Shipping Co Ltd of Limassol, Cyprus for 136 million in 1996 and got the “Million Hope” name. Only after 6 weeks of the purchase, the ship became a total loss near Sharm el Sheikh while sailing from Aqaba to Taiwan with 26.000 tonnes of chemical nutrients on board.

The Million hope left Aqaba port on 19 June 1996 and sank on the next day due to unclear circumstances. It is said that while approaching the Strait of Tiran fire broke out and the ship out of control went headfirst into the shallow reef near Nabq Bay, 11 kilometers (7 miles) north of Sharm El Sheikh.

Another story mentions that the catastrophe happened due to the poor visibility and because of leaving the strait’s prescribed navigation routes. The whole crew of 25 men (mainly Filipinos) was rescued by Egyptian naval vessels.

Authorities draw attention to leakage risk of fuel and chemicals on-board, but thanks to the prompt salvage operations, the ship’s cargo of potash and phosphates was completely removed shortly after the hit, as well as the oil leaking, was stopped without causing further damage on the surrounding coral reefs.

Snorkeling places in Egypt that you need to visit!