Home » Blog » The Importance Of Sea Turtles In The Ecosystem 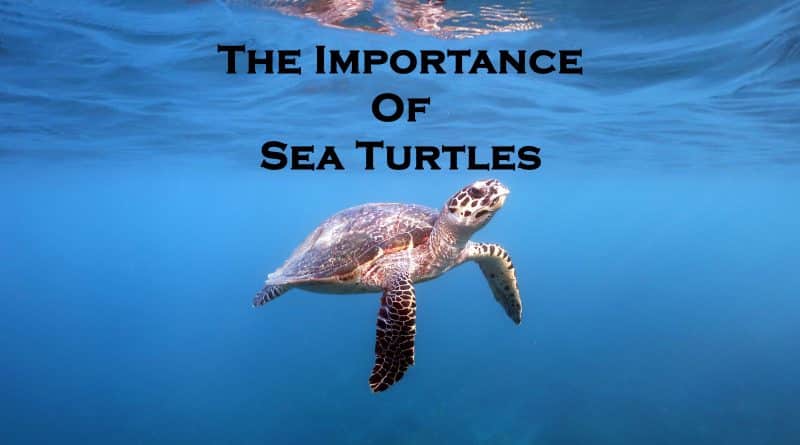 It is a bucket list adventure for all snorkelers and divers to swim with turtles. These creatures are beautiful and interesting, but most people do not know how important role this species play in the marine ecosystem. This article aims to explain why are sea turtles important and draw attention to why and how we should protect them.

What are the 7 species of sea turtles?

There are seven different species of marine turtles living in the world’s oceans:

Which sea turtles are endangered?

All turtles found in our oceans are as vulnerable, threatened, or endangered/critically endangered.

Where do sea turtles live?

You’ll find turtle species in almost all the world’s oceans (except cold climates such as the Antarctic and Arctic) from inshore shallow bays to deep oceans. Flatback turtles live only in the waters in the Pacific around Australia and Papua New Guinea, while the other six species are found all over the world.

Male turtles spend most of their lives in the sea, but adult females will nest on beaches during the nesting season.

Author’s tip: if you want to see turtles in their natural environment, check out my ‘where to swim with turtles’ article!

How long do sea turtles live?

One of the most interesting facts about sea turtles is that how long they live. Their general lifespan is 50-80 years, but some species can live up to 150, even 180-200 years. Most marine turtles mature between the age of 20 to 30 years and continue reproducing for another 10-20 years.

Why are turtles important to the ecosystem?

To understand the importance of sea turtles to the marine ecosystem, let’s break down how they help keep our oceans healthy.

Certain marine turtles (Green turtles) are feeding on seagrass, so they act as aquatic lawnmowers and prevent the seagrass from overgrowing.

Turtles eat fresh grass that grows a few centimeters from the sea bottom so they naturally keep seagrass meadows well-groomed. They remove and sweep away the old parts of the grass blades and like this, create healthy meadows that are crucial sources of oxygen and carbon and are also habitats for a variety of marine life.

Nesting turtles lay and bury their eggs in the sand. Hatchlings are food source for animals but also the unhatched eggs and even the remains of the eggshells are important for coastal ecosystems. While decomposing, eggshells supply nutrients.

Turtles provide home for epibionts. These are micro and macro creatures like barnacles, crustaceans and algae that usually grow on solid surfaces but settle also sea turtle shells, probably to take advantage of the fact that turtles swim through nutrient-rich, good quality waters so by attaching themselves to the shell, they stand better chances of survival and broader dispersal.

Why are sea turtles important to humans?

People cannot live without healthy ocean ecosystems. Oceans produce oxygen and absorb carbon dioxide, so their health is crucial to our planet as well as to the creatures that live on it.

Marine turtles have a key role in maintaining our waters’ ecological balance. They control jellyfish populations, remove overgrowing algae and sponges from coral reefs and keep seagrass beds groomed so our oceans remain healthy and thriving.

Besides their ecological importance, turtles are great tourist attractions too. Where they are present, the area’s economic value increases; as people want to see and swim with turtles, they boost tourism and generate income for local businesses such as dive centers and conservational organizations.

However, it should be stressed out that turtle-viewing activities should follow strict rules; they should never be chased, touched, fed or disturbed in any way.

What threats are marine turtles facing?

Turtles are vulnerable to climate change because it negatively affects their habitats and nesting beaches. High sand temperature, for example, causes a decrease in oxygen levels inside the nest, which could lead to fewer hatchlings surviving to adulthood.

A rise in temperatures affects the turtles’ gender. Fewer male hatchlings are born, which influences the species’ overall survival. Additionally, coral bleaching can occur in warm waters, which can devastate reefs that are the main food source for certain species, including the hawksbill turtle.

The sea turtle population has been devastated by ocean pollution. The primary pollutants affecting these sea creatures are ghost nets and plastic waste.

Development in beachfront areas also had a negative effect on ocean turtles. This includes various human activities around nesting beaches with numerous impacts including the following:

Turtles are hunted for their meat, shell, and eggs. Sea turtle meat is considered a delicacy in most coastal communities, particularly in Asia and Central America. Also, turtle shells are used to make different jewelry and other decorative items that can sell for hundreds of dollars each.
Illegal poaching does not only decrease turtle populations but already lead to the extinction of certain species in some regions.

What would happen if sea turtles went extinct?

Turtles play a vital role in maintaining healthy marine and coastal ecosystems so their extinction would have a major impact on the whole planet since if parts of the ecosystem are affected, the rest will be affected too.

The general health of the waters would start declining as turtles keep seagrass beds and coral reefs balanced; this would affect all marine creatures directly or indirectly.

Costal and dune ecosystems would suffer greatly too. Without turtle eggs and hatchlings, coastal areas would lose their main source of nutrients, become weak and start eroding at a faster rate.

How many sea turtles are left?

It is estimated that the current sea turtle population is around 6.5 million. 90% of the remaining turtles are female and only 10% are male.

How many sea turtles die each year?

Tens of thousands of turtles die each year worldwide.

The main reasons why sea turtles die are the following:

When did sea turtles become endangered?

The population of sea turtles started crushing significantly in the 1970s due to the overharvesting of their eggs and illegal trade for their shells and meat. The destruction of habitats, climate change, and pollution are also significant contributors to the decline of these species.

What can people do to help sea turtles?

According to studies, approximately 14 million plastics are thrown into the ocean annually. Marine debris is responsible for the death of about 1000 sea turtles per year; they either get entangled or eat it. Turtles easily mistake plastic bags for jellyfish and consume them, resulting in rupturing the internal organs and causing intestinal blockages.

As trash comes from human activity, it is our responsibility to prevent it from entering our waters. Try to live as sustainably as you can; reduce your waste and recycle everything you can.

Also, avoid single-use items like water bottles or straws. Most of these items are not recycled and take many years to break down, so they wind up in landfills and then find their way into rivers and the ocean killing marine life.

Sea turtles depend on dark skies; they use the light of the moon and stars to navigate. Artificial light in beachfront areas confuses the turtles so after laying the eggs, females have difficulties finding their way back to the water and also make hatchlings to get disoriented. Therefore, it is essential to keep nesting beaches as dark as possible.

Fishing is a fantastic outdoor activity, but you need to follow some rules when doing it in areas where turtles may be present so you do not harm them.
-don’t throw the fishing line overboard while fishing or boating. Fishing lines can entangle marine turtles, which can kill them.
-consider using a barbless hook or circle hook when fishing so there are no sharp barbs on your line that could harm marine life if it gets tangled
-if you have any leftover fishing line from your trip, bring it home with you instead of tossing it overboard, where it could tangle with wildlife later on down the road!
-change location if a turtle shows interest in your bait
-if you catch a sea turtle accidentally or find an injured one, call the coast guard or a local conservation organization immediately

Do not buy turtle shell souvenirs

Lastly, do not buy souvenirs made from turtles, such as shell jewelry or accessories. These products come from wild-caught animals and contribute to the decline of endangered species.

Spending money on such products is like supporting hunting for turtles so stay away from places selling products that are made from turtle shells and warn others to do the same.

As keystone species, turtles have a very important role in the marine ecosystem; they help create and maintain healthy habitats for other creatures and keep algae and jellyfish populations under control. There are numerous threats to them that made these species vulnerable, threatened or endangered. As most challenges they are facing are related to human activities and climate change, focusing on safeguarding their habitats and protecting their nesting grounds has to be a priority. There is no healthy ocean without sea turtles!