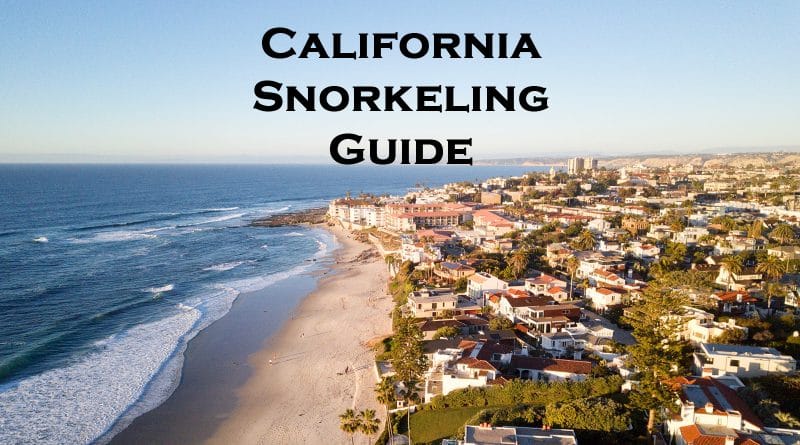 Did you know that The Golden State is America’s second-best region to go for an underwater adventure? With countless miles of coast that you can explore, snorkeling in California offers a variety of aquatic life along its beautiful beaches, moreover, there are superb clear-water rivers and lakes too that are worth visiting. No matter you travel to the Northern, Central, or Southern part of the state, this guide will help you to locate the best snorkel spots in California.

Though the weather is fantastic along the coast most of the year, this does not mean that snorkeling in California is pleasant at just any time. The Pacific Ocean has some chilly waters so wearing a wetsuit is a must almost all year round, but let’s see region by region how are the weather conditions.

In Southern California, the water will be warmer, varying from 70 to 75 degrees (21-24 C). Those temperatures drop into a 60 degree/15C range (and sometimes lower) during winter months. Prepare for the waves to be rougher in the winter months too, which will impact the clarity of the water.

Northern California is significantly cooler. Come snorkel in the peak summer months in order to be able to enjoy the experience comfortably, but again, don’t forget to pack that wetsuit.

Tip: If you prefer warmer waters, go and check out our Florida snorkeling guide!

Where to go snorkeling in Northern California

McAbee Beach is found in the Monterey Bay. This area is one of the best places to come when you are looking to go snorkeling in California in the north. The beach offers an easy entry point for divers and snorkelers.

A unique feature here is the old submerged pipelines. An artificial reef formed around the pipes, and now it is full of great marine life and fish.

Interesting fact: Over 130 years ago, this place was used by Portuguese whalers. They launched their boats from McAbee Beach and towed the whales back there after harpooning them. Luckily, this ended in the late 1800s. Today, Monterey Bay has become a prime whale watching spot in California. If you want to take a break from snorkeling, we highly recommend a whale watching tour in Monterey. They can be spotted here during every season.

Gerstle Cove lies just under the Salt Point State Park visitor center. These waters have been designated as protected thanks to the Gerstle Cove State Marine Reserve. Since fishing is not allowed here, there is more marine life for you to enjoy while snorkeling.

The beach itself is rocky, so families with small children should take care. Make sure to pack water shoes to avoid injuries! While the Salt Point shelters the cove some, there are also occasional violent waves that crash on the shores. In calmer periods and while the tide has gone out, tide pools are available for you to explore. Besides snorkeling, the park itself provides many different activities including, hiking and even trails for mountain biking. You can camp along the park’s southern end too. A great place that the whole family can enjoy!

The primary beach found in the city of Carmel is called Carmel River State Beach. This is one of the greatest Northern California snorkeling spots thanks to the fact that it actually looks like Hawaii on clear and tranquil days.

Along the south parts of the beach, there are fantastic rocky formations for you to explore. The view to the left is of Monastery Beach while to the right you see Point Lobos. The best feature here is definitely the views that you will never get tired of watching.

Lying off the coast of Los Angeles you find Catalina Island. This is the only channel island that boasts a significant population. To get to the island, you need to hop on one of the daily mainland California ferries that go to Avalon, the primary tourist city.

Catalina Island is known as one of the best California snorkeling destinations with good reason. You have the opportunity to see Leopard Sharks, Garibaldi, Yellow Tail, Rock Cod, and Bat Rays too. Fantastic water visibility is a huge plus. In the deeper waters, there are several sunken wrecks to explore, but these are better suited to divers than snorkelers.

Around the island beyond Avalon there are plenty of other unspoiled snorkeling spots waiting for you, but the two most recommended spots you should not miss out are the Avalon Underwater Park and Lover’s Cove.

The town of La Jolla lies to the north of major city, San Diego. This beautiful place offers visitors not only stunning beaches but some of the best snorkeling in Southern California that it is easy enough for the whole family to participate thanks to the usually calm waters. There are even a few places to rent sports gear in La Jolla, but due to hygienic reasons, we recommend bringing your own snorkel set.

La Jolla Cove itself boasts seven individual caves. In this sheltered bay, there are many leopard sharks swimming the waters from June through December. These are fun to watch, harmless, and only several feet long.

There are also underwater tombstones lying between 100 and 125 yards off of the La Jolla Cove Beach Club. You will be able to see these tombstones that were placed here in memory of the spear-fishermen who died in this water in the past.

An incredible group of islands that lie off Santa Barbara’s coast are the Channel Islands making up the national park of the same name. Five of these islands definitely belong to the best Southern California snorkeling places including Santa Rosa, San Miguel, Santa Cruz, Santa Barbara, and Anacapa. (If you have time to visit just one island, or pick is Santa Cruz!)

Visibility at points here amounts to even 100 feet and better. You can expect to see sea life such as Halibut, White Sea Bass, Yellowtail, Sheephead, Bat Rays, and Garibaldi in this stunning visibility. If you do some diving here, there are spiny lobsters to see up close.

Laguna is one of the most popular beaches of the state, yet a lesser-known gem for those who look for the best snorkeling in California. Shaw’s Cove, this neatly hidden beach under some of the homes in the city is a must-visit spot if you are around. Public access is available from the Cliff Drive and Fairview Street intersection that lies only a block off of California’s Pacific Coast Highway. You will have to walk down a long stairway to reach the beach, but the experience that awaits you is worth the effort.

In low tides, there are tide pools that you can explore. Snorkeling fans will enter the waters off the coast from this beach along with scuba divers (there are scuba diving classes here if you are interested). Along the south end of the beach is a large flat rock area that you can climb after you have finished snorkeling.

Not so far from Laguna beach, there is another excellent California snorkeling spot, Crescent Bay that earns its name from its crescent-like shape. The beach offers great views of the expensive Laguna homes. You will find good snorkeling places here on both the south side and the north end of the beach with extensive kelp forests. The middle does not offer much besides an occasional ray trolling the smooth sandy bottom.

Most of the best features of the beach lie to the north. Tide pools found here match the underwater topography that makes it a unique site for snorkeling. The reef continues out roughly 100 feet away from the shore at one point. In the reef’s middle is a little underwater valley. On both the south and north sides you can expect to see Big Sea Stars, Rockfish, Sea Urchins, Perch, Sandbass, and Eelgrass too. There is also an occasional leopard shark or ray in the waters.

Lake and river snorkeling in California

Lake Tahoe is a stunning blue water lake that is clean and pristine lying within the Sierra Nevada Mountains. One of its claims to fame is that this is the biggest Alpine Lake in the U.S. and the second deepest (after Crater Lake in Oregon). The lake is pretty equally divided between the states of California and Nevada.

On the California side, the water is so pristine that even an underwater trail was opened showcasing wooden barges and fishing boats. With depths ranging from 10 to 60 ft (3-18.2m), The Emerald Bay Maritime Heritage Trail is a fantastic spot to snorkel and dive.

In the height of summer, there are endless activities to do around Emerald Bay making it a popular destination for outdoor enthusiasts. Besides admiring the lake’s underwater wonders, you can go kayaking, hiking and exploring historical buildings, or just relax on the turquoise beaches and take in the beautiful scenery.

The Klamath River is another fantastic freshwater snorkeling in California. This massive river actually flows for 257 miles around Oregon and through Northern California before it finds the Pacific. This river is very popular with visitors for kayaking and fishing too. A beloved spot for going snorkeling on the Klamath River is Blue Creek. The bottom is rocky and the waters are frequented by many different fish including Steelhead and Spring Chinook Salmon.