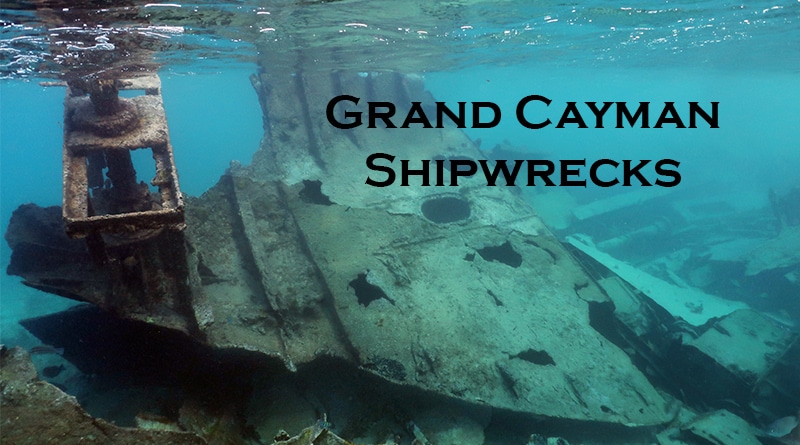 A Grand Cayman shipwreck snorkeling tour will be the highlight of your vacation if you seek for an adventurous water activity! No matter you visit the impressive USS Kittiwake or just enjoy a comfortable snorkel trip over shallow water wreckage like the Cali or Gamma, we guarantee that you will have fun!

Grand Cayman snorkel places provide you with the opportunity to explore vibrant coral reefs and rich marine life, but we highly recommend to put also Grand Cayman shipwreck snorkeling on your activity list! This beautiful Caribbean island abounds in excellent shipwrecks that attract avid divers but some of them rest in shallow water offering ideal conditions for snorkeling.

Related: do you like wrecks? Learn about the Antilla shipwreck in Aruba that is the biggest shipwreck in the Caribbean!

The enormous USS Kittiwake is the most known and most visited Grand Cayman shipwreck. The close-to-shore location offers fantastic diving conditions but the shallow depth makes it a perfect place for free-diving and snorkeling too.

This massive ship operated as a rescue vessel for 49 years worldwide including the Caribbean, the Mediterranean Sea as well as the Atlantic and Indian Oceans. Her main function was to help and rescue submarines.

According to records, the crew also picked up refugees while cruising off Key West, Florida. The USS Kittiwake was decommissioned in 1994. 8 years later she was donated by the United States Maritime Administration (MARAD) to Grand Cayman in order to create an artificial reef that attracts marine life as well as boosts dive tourism.

The vessel was cleaned out of dangerous materials before she was sunk in 2011 into 60ft/18m deep water off the beach on the northern side of Seven Mile Beach. Thanks to the excellent water clarity, the wreck is clearly visible from the surface as well. The Kittiwake wreck moved and changed her original position after being hit by tropical storms and hurricanes over the years. In 2017, Tropical Storm Nate broke her anchor chains and now she rests on her port side.

Although the Kittiwake shipwreck lies relatively close to the shore, you cannot swim to it on your own. The area is a marine park that only licensed operators can enter. Moreover, you need to pay an entrance fee that goes for the maintenance of the area.

The entry fee is 5 USD/4 CI for snorkelers and 10 USD/8 CI if you do scuba diving. When paying the entry fee, you will get a wristband that you need to wear while in the area. Snorkelers and divers that don’t wear the band need to deal with authorities. If you want to see this enormous wreck, sign up for a Kittiwake snorkel trip!

Wreck of the Cali

Thanks to its central location and shallow depth, the Cali wreck is a very popular Grand Cayman shipwreck snorkeling spot. It is easily reachable from the Seven Mile Beach area as well as from the nearby cruise port.

Cali was originally a freighter but later she got a diesel engine. This seemed to be a failure because the powerful engine weakened and finally cracked the hull when she was loaded with 30000 bags of rice.

The Cali sunk in George Town Harbor creating an excellent dive/snorkel spot. The wreckage consists of some bigger parts such as hull plates, ribs and which wheels as well as a debris area. The Cali Wreck works as an artificial reef: various corals and sponges settled on the remains attracting marine life to the area with resident huge tarpons as a highlight.

How to get to Cali Wreck?

The Cali Wreck lies directly in George Town Harbor, about 0.2 mile/300 m from the cruise port. Just walk on the sidewalk and you will see a big Wreck of the Cali sign next to the road. This is where you need to get to the water, right next to the Rackam’s grill restaurant. The water access is very convenient through the concrete dock.

The Cali Wreck rests about 160 ft/50 m from the pier and is marked by white buoys. The average depth is 20-30 ft/6-9 m. Pay attention to the boat traffic in the area. Stay close to the marker buoys while snorkeling, if you plan to dive to get close to the wreck, carry a high visibility swim buoy.

Wreck of The Gamma

A very easy yet spectacular snorkel spot in George Town. The Wreck of Gamma rests 10 ft/3m from shore in about 15 ft/4.5m deep water with its top part above water that adds a special historical atmosphere to the location.

Although the wreck is broken into several bigger pieces but it is in relatively good condition. There is always plenty of fish around including sergeant major, wrasse and filefish.

By calm seas, the Gamma Wreck offers the safest and easiest Grand Cayman shipwreck snorkeling that we recommend for beginner snorkelers and kids as well. If the sea is rough, don’t try to approach it because the waves might push you to wreck and cause injuries.

You can get to the Wreck of Gamma through the public beach access next to Poinsettia Condos. Free parking is available just across the road. (you cannot use the Poinsettia Condo’s parking since it is private) It is just 0.6 mile/1 km far from the port so easily reachable for cruise shippers too.

You can enter the water simply by walking through the rocks, but a safer and more convenient way is if you walk back about 100 ft/ 30 m to the small ocean pools and swim out to the wreck from there.

Maybe the Geneva Kathleen is not as impressive as the above-mentioned Grand Cayman shipwrecks, but it is an easy and enjoyable snorkeling adventure on the ‘quiet’ side of the island. The remains of the Geneva Kathleen rest near the less popular yet lovely Barefoot Beach on the East End.

It is not a developed beach; only a narrow path leads to the water and you need to park next to the road. To get to the Geneva Kathleen wreckage, swim to the right towards the cliff wall. A small winch wheel and some debris can be found directly next to the shoreline.

A marker buoy indicates the exact location in front of the stone staircase. If you continue swimming towards the reef, about 150 ft/50m from the shore you will find some bigger parts of the ship’s structure as well as anchor chains, piled bollards and another bigger winch wheel.