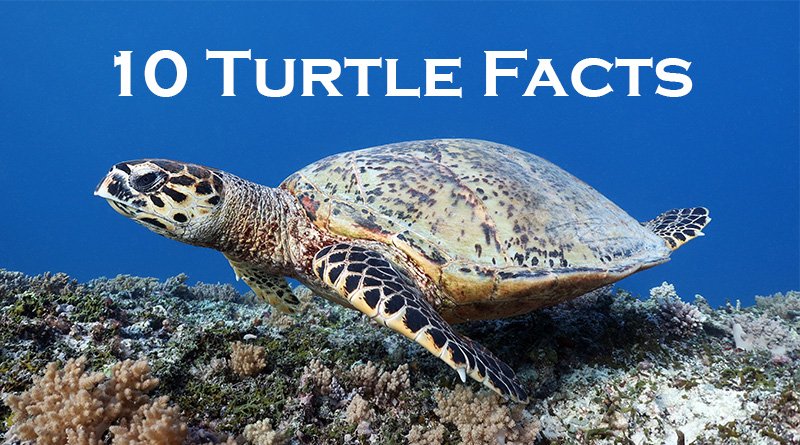 10 turtle facts that are interesting, weird and sometimes shocking. I am sure you love turtles but how much do you know about them? Get answer for all your questions about your favorite sea creature like how long turtles live, what they eat, why they return to the beach, where they were born and what species are endangered?

10 turtle facts you need to know

You might wonder what are these wonderful creatures exactly? Are turtles reptiles or amphibians? Well, turtles belong to Testudines, one of the oldest reptile groups in the world along with terrapins and tortoises.

They have been around over 200 million years, since the time of the dinosaurs! Turtles live around 40-80 years, the oldest species recorded was 188 years old.

Turtle’s shell is part of their skeleton

Most species have a hard shell that protects their body and organs and consist of 50-60 bones. Only some species feature soft shell. The top part of the shell is the carapace, the bottom is the plastron.

The turtle shell is covered with keratin-containing scutes that fuse the bony structure together. Some species can retract their head and flippers into the shell.

The shell grows with the turtle. It is one of the most fascinating turtle facts that the shell’s shape and pattern is unique like a human fingerprint and determined mainly by the environment and eating habits.

Turtles live in and around water

Most turtle species live in South Asia and North America but they can be found all over the world except cold climate. Sea turtles spend almost their entire life in the water. Female turtles leave the ocean when laying eggs.

Freshwater species are different and you often can see them sunbathing on rocks. Tortoise species don’t live in the water. The difference between turtles and tortoises that tortoises live only on land. Their feet are adapted for walking. When it is too hot, they dig holes to lie in.

Tip: Do you enjoy our turtle facts post? Want to learn more about sea creatures? Read our other marine biology posts and learn what are the Christmas Tree Worms, why are parrotfish important in the ocean, how sea stars move and educate yourself about lionfish invasion! Should you wish to know more about underwater world? We recommend reading marine life guides.

Although sea turtles can stay underwater for hours if it is necessary, they need to come to the surface for air approx. every 5 minutes to breathe. On places where the water/land freeze during winter, they can hibernate themselves.

We are sharing this turtle facts article not only for educational purposes but also to draw attention to responsible snorkeling and remind you don’t disturb them when surfacing! Keep a safe distance and never try to touch them!

Some species are vegan

They can be meat eaters or plant eaters. Baby turtles are often meat eaters but change to a plant-based diet when they grow.

Turtles that live on land use to eat fruits and grass. A sea turtle mostly eats jellyfish, algae, sponges, shrimps, mollusks, and crabs. Like this, they help control the population of such species; this is one of the main reasons why sea turtles are so important to the environment.

They love seagrass as well and often can be spotted in shallow lagoons where the sea bottom is rich in seagrass. Therefore, they can be easily observed while snorkeling!

Tip: see what are our favorite countries to swim with turtles!

The biggest species are the leatherback turtles that can reach the size of 5 feet (150 cm) and weight 500-1500 lbs (225-680 kg) The alligator snapping turtle is the largest freshwater species but might seems quite small comparing to a sea turtle with its 3 feet (90 cm) size and maximum 200 lbs (90 kg)weigh.

From the other side, it is a pretty interesting one of the turtle facts that the smallest tortoise, the Cape tortoise is only 3 inches (7 cm) long and weighs 5 ounces (140 gr).

They are slow on land but fast in water

If you’ve ever observed a turtle walking on land, you noticed how slowly and heavily they move. Even species that spend their entire life on land have short legs comparing to their body size that make them awkward while moving around.

However, turtles are pretty fast in the water! Their body is streamlined. They use their front flippers for propulsion and their rear flippers for steering.

All turtles have good senses of touch, smell, hearing, and eyesight. But they have some advanced “instincts” that make them so special. One good example for this is the innate behavior that helps baby sea turtles reach the ocean.

Scientists explain this phenomenon that the newborns can identify the difference between light over land and over the water that helps them to make their way to the ocean.

One of the most interesting turtle facts is their compass sense that makes them able to navigate through oceans. Female turtles always return to the same beach to lay their eggs.

In order to do this, they migrate thousands of miles. Presumably, they use the currents to travel, but marine biologists still know very little about his special skill.

Sea turtles lay eggs on land and bury them

It takes 12-40 years to reach their breeding age. They dig a nest in the sand using their back flippers and lay approx. 100 eggs. The warm sand works like an incubator and the eggs hatch in about 60 days.

One of the most amusing turtle facts is the Temperature-Dependent Sex determination. This means that the baby sea turtles gender depends on the temperature of the sand.

Warmer sand means more female turtles, cooler more males. Sad fact is that due to climate change and warming temperatures there have been more female baby sea turtles born than males lately that can lead to a catastrophic situation.

Almost all turtle species are listed as vulnerable, endangered or critically endangered according to IUCN Red list. Some tortoise species are predicted to extinct in 50 years. The biggest threats related to human lifestyle including pollution, irresponsible coastal development, illegal fishing as well as global warming.

Probably the most shocking one of the turtle facts is that almost all sea turtle species are listed as threatened or endangered as per as the following: