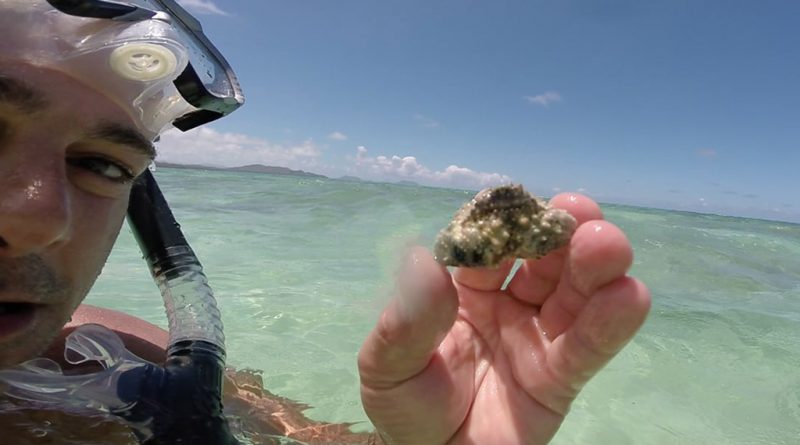 The Island of Oahu in Hawaii is famous for it’s excellent snorkeling and the Kaiona Beach Park is one of the best spots to visit. Explore it today with Ken who has snorkeled almost every nook and corner of Oahu. Enjoy his photos and videos!

Every once in a while you happen upon a gem of a snorkeling spot that just not that many people know about. When I first got to Hawaii back in 2014, a friend of mine told me of a place that they called “Honu Heaven” because of the many turtles that feed there and frequent the shallow waters.

Kaiona Beach Park is part of the southeast tip of Island of Oahu and it’s very close to Waimanalo Beach. Heading from the west of Oahu and Honolulu, you’d have to travel past Hanauma Bay, Sandy’s Beach (where President Obama hangs out when he’s on vacation in Hawaii), Makapu’u Lighthouse and Waimanalo Beach Park. Very close to Kaiona Beach is Sea Life Park and the back drop for the old, 1980s television hit, Magnum P.I.

Also, for a magic touch, the Kaohikaipu Island State Seabird Sanctuary and Rabbit Island sit awesomely as part of the view. All of the stuff around it, though, isn’t what makes Kaiona Beach Park so special. It’s the lack of a certain thing that makes Kaiona a gem. And that “thing” is tourists. This is very much a local’s beach and they like their beaches and land to be respected so if you’re heading to Kaiona then be sure to do so with respect.

The beach is very clean and relaxed. I was actually there on a Saturday one day and had the entire beach to myself for a few hours. It was pretty majestic. The surf is low. The water is clear and shallow. The fish and turtles are plentiful. So bring your snorkel gear and expect to have a great time in the waters.

I’ve seen so many Hawaiian Green Sea turtles at Kaiona that I can’t even remember. They’re plentiful there. Mostly because of the easy feeding of sea vegetation off the coral and rocks and partly because of the relaxed atmosphere and uncrowded waters.

Make sure you only use ocean safe sunscreen when visiting Hawaii and at other places too in order to protect the marine life!

I have videos (remember, I’m a snorkel fanatic, not a photography buff…but I do my best) of three sea turtles in one video, one of which I didn’t even see until later that my girlfriend was trying to point out to me.

I consider myself an expert on snorkeling locations on Oahu having researched and visited most of the best spots on the Island and some spots that I don’t even tell people about. I have to say that one of my favorite places to snorkel and just enjoy a quiet day at the beach is Kaiona Beach Park. If you’re on Oahu then do yourself a favor and make your way over there for a great day of snorkeling.

You can read more about Ken’s experience on: snorkelstore.net