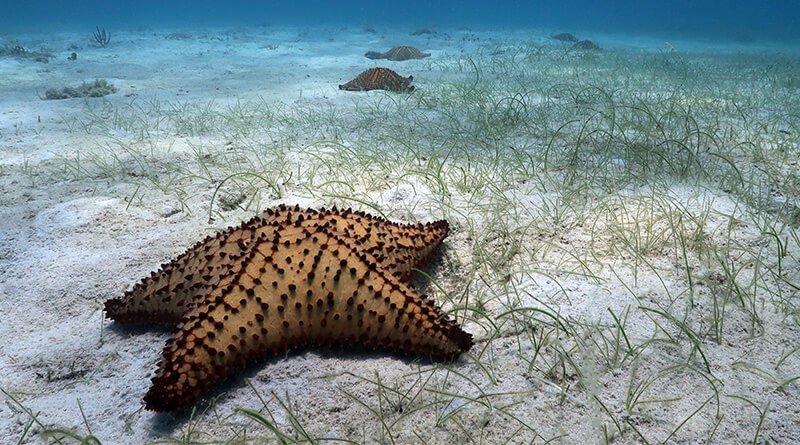 Sea stars are snorkelers and divers favorite creatures in the oceans. These colorful and slow-moving animals providing great topic for underwater photos making the composition idyllic. With this info guide, you will get a wider knowledge and some interesting facts about starfish.

Many people call sea stars as starfish, but in fact, they are not fish. They belong to the invertebrates. They do not have backbones like sea urchins or sand dollars. Marine biologists tried to replace the starfish common name with the correct designation, but they are still widely called starfish. In many languages like German, Dutch, Spanish or French, they are the stars of the sea.

At first sight, it seems that sea stars spending the days just lying on the ocean floor doing nothing. But in fact, they have a complex life with a lot of actions happening. Join this little marine biology section and learn about these bizarre creatures through 10 interesting questions and starfish facts!

Where do sea stars live?

Sea stars are absolutely saltwater fanatics – they don’t live in freshwater. They can be found on rocky shores, in seagrass, kelp beds, coral reefs, tidal pools and also in sand. Some live as deep as 6000 meters (20.000 ft) in the ocean floor. Many species live and feed around shallow coral reef makes them easily noticeable. The most beautiful ones we saw on the Red Sea coral reefs and in the Caribbean Sea at Aruba snorkeling spots. There are more than 2000 different species living in the world oceans, most of them in tropical waters but there are cold water species as well.

How long sea stars can live?

Usually, they live for about 10 years but some species up to 35 years. They spend most of their life alone but congregate occasionally in larger groups during certain times of the year to feed or mate. Starfish capture oxygen from the water meaning if they are out of water they can die in short time since they cannot perform gas exchange.

How big is a starfish?

Is it true that sea stars don’t have brain and blood?

Yes, both are correct. They have no brain but a complex highly developed nervous system that runs around the mouth and in the arms. They detect the environment through their tiny tentacles that work like sensors. Instead of blood, they circulate sea water in their body.

How many arms starfish have?

Most of them have five arms, but some species can grow 10, 20 or even 50 arms. These arms are covered with pincerlike organs which help the sea stars to slowly move on the sea floor. Starfish are survivors! They have the ability to regenerate limbs or some species even their entire body just from a portion of a severed limb!

Do starfish have eyes?

If you were ever wondering if sea stars have eyes, the answer is yes! On the tips of the arms, they have eyespots. For a long time, scientists thought that they are not able to see due to lack of a brain, but studies proved that they see rough images. The eyespots are important to help them find food and also to navigate.

How do sea stars move?

Don’t think that starfish spend their life in the same place! Just watch them for a few minutes and you will notice that actually, they move quite fast! They have tiny tentacles “tube feet” on the underside of their body and can move up to 2 inches (0.5 cm) per second. The tube feet are also able to create vacuum help starfish to cling to rocks or corals.

What sea stars eat and how?

They eat usually mollusks (clams, snails or oysters). When sea stars feed they extend their stomach through the mouth and the enzymes from the stomach digest the prey. When digestions finished, the stomach withdraws back into the body.

They are sometimes eaten in China, Japan and in Micronesia – In the Indonesian archipelago the people cut them up, squeeze out their “blood” and cook them with tamarind leaves. After they remove the outer skin and cook again in coconut milk. But in other places in the world, they are only occasionally used as food because of saponins in their body that gives an unpleasant taste. Some species also contain poisonous tetrodotoxins. It is much more common than they are sold as souvenirs.

We do not think it is a nice thing so we ask you never buy any sea souvenir. Imagine if people keep buying sea creatures as souvenirs, the sea soon will be empty. In the early to the mid-20th-century trade and collection have reduced their numbers in the Caribbean and along the coast of the West Indies, therefore, some species were listed as endangered. Although the collection became illegal it is still sold in several places.

If you see a sea star, take photos only but don’t move or touch it. Remember, it is one of the most important safety rules in snorkeling that we respect marine life.

Why are sea stars important in the ocean?

Sea stars play a key role in controlling marine ecosystems. They have the ability to adapt to different conditions easily meaning they withstand the fast-changing sea conditions caused by global warming. Their diet makes them ecologically important. Wea stars are one of the most important predators around shallow coral reefs. Some study confirmed that their removal from shorelines resulted in lower marine diversity while certain mussels started to increase in number dramatically.

However, invasive species have negative effect on ecosystems: the crown-of-thorns sea star outbreaks caused serious damage on the coral reefs in Australia. In French Polynesia, migratory sea star species damaged drastically the reef resulting in a huge drop in coral covered areas from 50 % to 5 % in three years. Some sea star species are among the world’s 100 worst invasive species. Outbreaks are linked to rising sea temperatures and El Nino events that organizations try to control by organizing removals of invasive species.