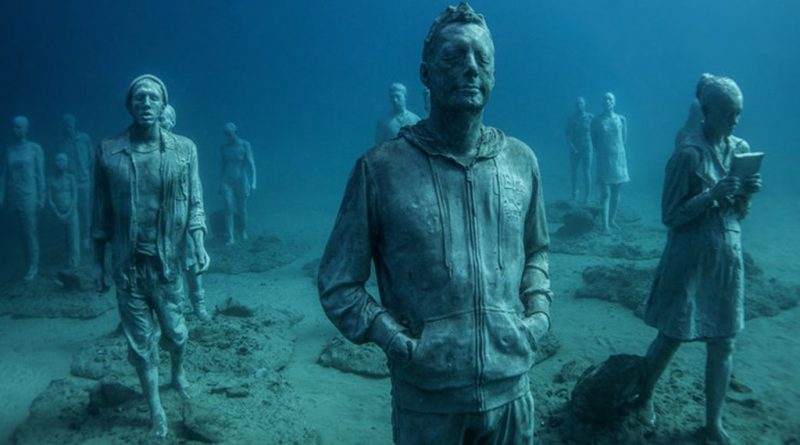 The Underwater Museum in Lanzarote is the only undersea gallery in Europe. In the depth of 12-15 meters, the Museo Atlantico features the sculptures of Jason deCaires Taylor famous British sculptor. His meaningful installations in the Canary Islands can be seen while diving and snorkeling, but also from glass bottom boats.

Where is the Underwater Museum in Lanzarote?

The volcanic island of Lanzarote belongs to the Canary Islands, Spain and locates approx. 125 kilometers (78 miles) off the coast of North Africa. When deciding on the Museo Atlantico location, the purpose was making Lanzarote more competitive compared to the nearby Gran Canaria or Tenerife by creating a cultural attraction and boosting the dive tourism on the island.

The Underwater Museum in Lanzarote is in Playa Blanca, Bahia de las Colorados. The 2500 square meter area has a sandy bottom that offered perfect conditions to place the installations. The sculptures are in the depth of 12-15 meters. The best way of observing the statues are scuba diving, but freedivers and snorkelers can also enjoy the place. If you are a non-swimmer, look for Museo Atlantico glass-bottom boat tours!

Tip: See our Lanzarote snorkeling post to know what are the best beaches to snorkel on the island!

Jason deCaires Taylor’s sculptures are famous for representing our modern society’s problems and actual topics. No wonder why his previous projects became famous worldwide like the Ocean Atlas in the Bahamas, the Nest underwater statues in Gili Meno or his figures in the Cancun Underwater Museum. Lanzarote underwater sculptures put digital life’s problems along with the refugee crisis in the center.

He used eco-friendly PH-neutral concrete for the underwater sculptures. This special material does not affect the marine ecosystem but promotes coral growth. Like this, the figures in the Underwater Museum in Lanzarote form an artificial reef and turn the area into a breeding site for local species. In tropical waters the coral start to grow quickly on the statues. But since the colder Atlantic Ocean does not promote so rapid coral growth, the artist could focus more on the details and stronger dramatic forms to be able to deliver important messages to humanity.

Learn more below about the installations of the Underwater Museum in Lanzarote:

The Rubicon installation consist of 35 underwater sculptures that are walking towards a 30 meters long 4 meters high wall with a door in its center. The group of these 35 people carrying smartphones and iPads.  This Instagram-generation shows the dependence on our electronic devices. While the wall represents a dysfunctional gate emphasizing that we cannot separate ourselves from nature and there are no borders in our oceans and air. It reminds humanity that anything we do locally affects the whole world and the life of billions of people.

The Raft of Lampedusa

One of the most significant creations of the Underwater Museum in Lanzarote is The Raft of Lampedusa, the modern version of the French Géricault’s painting The Raft of the Medusa from 1818. The installation forms a little boat that carries 13 refugees towards the unknown future. It is a reminder of collective responsibility.

Jason deCaires Taylor’s model was the 29 years old Abdel Kader as the figurehead of the boat. Abdel was 12 years old when he made the journey from Laayoune (Western Sahara) to Lanzarote. He lost his sister and father at home. He worked, saved money and found the way to the traffickers who transported him across the Sahara to escape to Europe on a small fishing vessel along with other 23 passengers. At the open sea, the engine stopped. After 4 days of desperate fight against the sea, the passengers were tired, they lost the pails and the vessel was flooded. Abdel didn’t know how to swim. Fortunately a fishing boat found them and radioed for rescue. Abdel called his mother from Lanzarote who didn’t even know that he has left…

The statue of a young faceless couple stands next to the Raft of Lampedusa who take some selfies while the refugees fight for their life in their sinking vessel. This scene represents how careless people became and lost the sensitivity to others’ problems but are always ready to take some sensational shots to get famous for a few seconds.

As a tribute to local tradition, a group of children playing in ‘jolateros’ brass boats as a metaphor of good old times and the possible future for nowadays children.

The latest addition to the Underwater Museum in Lanzarote is the majestic Human Gyre. This includes over 200 life-size figures in a circular form. Since the installation works as a complex reef where fish, corals and other sea species settle down on and between the figures, it reminds us that humans are connected to the ocean and cannot live without marine species.

Showcasing a traditional funeral, this creation consists of a local man figure lying on the top of concrete sticks. Interesting fact is the model for the installation was a fisherman from La Graciosa Island.

A meaningful group of statues forming a playground that is enjoyed by businessmen. The seesaw references an extraction pump referring to the uncontrolled use of fossil fuels. The dolphin ride indicates the collapse of marine ecosystems.

To make a reference to the island’s rich vegetation and celebrate the long standing relationship between nature and art, the Underwater Museum in Lanzarote has a dedicated section, the Botanical Garden. Here several half human-half animal statues got place such as the Hybrid Cactus and The Portal figure that is looking into another ‘blue’ world through a big mirror.

Ibiza snorkeling guide – Where to go & what to see

Snorkeling in Fuerteventura – Complete guide to the best spots