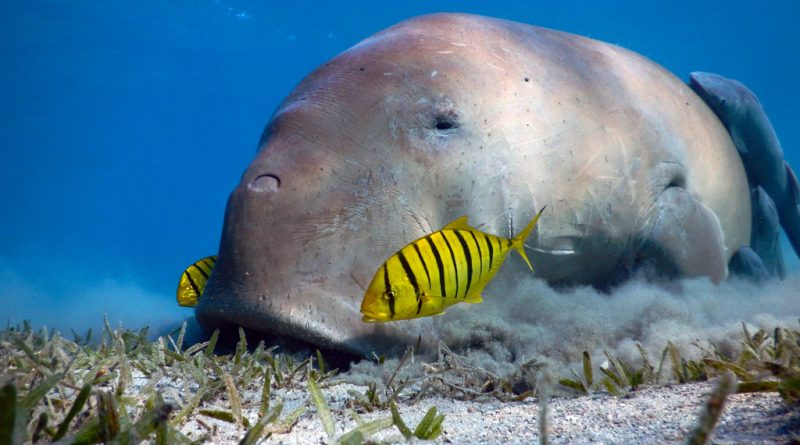 The Red Sea is famous for its rich underwater life, considered as one of the best places for snorkeling and diving on the entire world thanks to its clear water and year-round good weather conditions. The whole Egyptian coast features first-class coral reefs so at first sight, it seems difficult to decide where to snorkel in Egypt. No matter where plan your Egypt holiday, Hurghada or Sharm el Sheikh, you’ll find vibrant corals and playful fish. Buf if your dream is to go snorkeling with dugong in Egypt, book a trip to Marsa Alam! The endangered sea cow lives only in a few places in Egypt, usually in sheltered bays where they feed on seagrass. Marsa Mubarak in Marsa Alam is one of these sandy bays where you have a high chance to see a dugong in natural environment!

Things to know about the dugongs in Egypt

This rare marine mammal lives in warm coastal waters from western Pacific to East Africa. Being hunted for a long time for meat and oil, IUCN lists the species as vulnerable to extinction. It already disappeared from the Maldives and Mauritius. Some population remains for example in North Australia, Persian Gulf, New Caledonia, Kenya, and Mozambique. They tend to appear in Southeast Asia too. If you live in Europe, luckily you son’t need to travel that dar because you can see dugong in Egypt around Marsa Alam too!

Unfortunately, the Red Sea population is very small. There are only a few places in the southern region where you have a chance to dive or go snorkeling with this unique sea creature. The sea cows reside in sheltered, sandy bays like Marsa Mubarak, Marsa Shagra or Marsa Abu Dabbab.

The world ‘marsa’ refers to bays where the reef breaks off allowing growing up a sandy beach. These bays are usually rich in seagrass areas providing excellent feeding ground for the dugong.

First of all, clarify one thing. It is never 100% that you will find the dugong in Marsa Mubarak. The bay has at least one territorial male dugong, some say two dugongs reside in the bay. But being free creatures, of course, they are not always “at home”.

What is the best time to see the dugong?

The locals say the chance to spot him is higher early in the morning before boats and groups arrive, or in the afternoon when the crowd leaves. Although it seems dugongs enjoy human’s company, typically they leave the bay and search for quieter areas when it becomes too noisy during the day.

Despite their massive body, (adult dugong size is typically between 551-1980 lbs -250 and 900 kg- and around 9.8 ft – 3 m) dugongs are peaceful creatures. Their diet consists of seagrass, that’s why they are called sea cows too!

In Marsa Mubarak, dugong usually feed in the shallow left corner or in the middle of the bay where there is an orange buoy. Spotting the dugong is easy if the water is calm and relatively flat. She needs to come up for air so just watch the sea surface from the shore and you will spot his head if he is around. If there are other snorkelers in the water and they gather in one place, you can be sure that something is going on there and they found the dugong or sea turtles!

Fun facts: The dugong is Marsa Mubarak was named Dyson by locals! His favorite activity is playing with the sea turtles.

How to react if you see a dugong?

Snorkeling with a dugong in Egypt or anywhere else in the world is a lifetime experience. First of all, they are huge but don’t be scared! As mentioned, dugongs are harmless creatures and seem to enjoy when people photograph and film them. If they are tired of tourists simple move to deeper water.

The most important is, don’t touch the dugong! Furthermore, leave enough room for them to come up to the surface for air! Considered as vulnerable species, feel yourself lucky if you see one! Never chase them and educate others too how to handle the situation.

Other marine species to see in Egypt Marsa Mubarak

The biggest attraction is definitely the dugong in Marsa Mubarak but there are many other beautiful creatures to see! Huge sea turtles are also residents of the bay, that’s why its local name is Turtle Bay.

They are as big as an adult human, search them in the shallow areas on the left side or around the orange buoy. Sometimes they are also accompanied with remora fish.

It is worth to snorkel around the small reef on the left side too, where you can observe different type of reef fish. (Anemone fish ‘Nemo’, Parrotfish, Banner and Butterflyfish, Damselfish just to mention a few species) Blue Spotted rays, Eagle rays, moray eels and guitarfish are also common here.

We hope that our photos will inspire you to visit the Marsa Alam region and you will be lucky enough to snorkel with the dugong. Once again, please respect marine life so it can be preserved for future generations!

How to get to Marsa Mubarak

The sheltered Marsa Mubarak bay (also known as Turtle Bay) is not so far from the Marsa Alam International Airport (7 km). A celebrated place among snorkellers and divers who want to swim with dugong in Egypt. Most tour operators and dive centers offer day trips here, ask assistance from your travel agent or hotel tour agent.

Alternatively, you can book a private taxi but in this case, expect to pay entrance fee. The best is staying one of the close-by hotels, we show you right below what are the options!

Although there are several good hotels in the Marsa Alam region, your selection is a bit limited if you wish to visit Marsa Mubarak hoping snorkeling with dugong in Egypt. Marsa Alam has a long coastal area meaning there are big distances between the resorts. Some Marsa Alam hotels are more than 100 km far from the airport so it won’t be worth traveling back.

We recommend you booking a hotel close to the Marsa Mubarak bay! The closest one is Three Corners Fayrouz Plaza Beach Resort which is within walking distance from it. You can freely walk from the hotel to the bay on the shore anytime you want without paying any fee.

Fayrouz Plaza is an exclusive 5-star resort delivering high service level to its international guests. Highly qualified staff pays attention to the smallest details too to make your Egypt holiday carefree and unforgettable. The best hotel we stayed in Egypt so far! Great location close to the airport, excellent hospitality and top-notch house reef that is perfect for snorkeling and diving.

Also, a good decision staying one of Port Ghalib hotels too, from where the bay is available with a short 15 mins taxi ride. Port Ghalib is a luxurious marina and tourist center just 5 km away from the airport. A popular place to stay for those who prefer going out in the evenings for a short walk or visiting local souvenir shops.

Currently, a new hotel is being built in Marsa Mubarak called Labranda Turtle’s Bay but the opening date is unsure. This is not a completely new project, the construction began years ago but was suspended for a while until started again lately. Some agencies already started to advertise the hotel but since the finishing date is unknown, it is not bookable at the moment. We hope it won’t be a negative impact on the bay’s resident dugong and sea turtles once it will open.

Snorkeling places in Egypt that you need to visit!

Snorkeling in Egypt – Complete “Where to go” guide