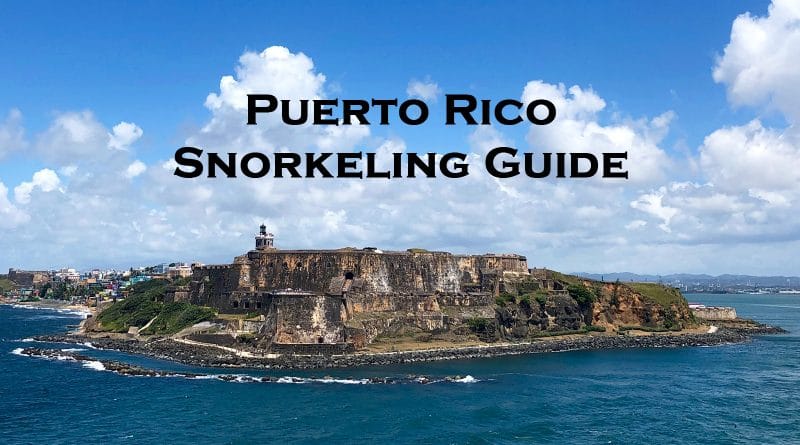 Thanks to its incredibly unspoiled beaches, pulsing and pounding nightlife, and lush tropical rainforests, Puerto Rico, this U.S. territory island archipelago -that consists of the main island and several smaller ones- is a top destination vacation. Among the widely varied activities, the most popular are definitely water sports. Vibrant reefs and rich marine life offer excellent conditions for those who wish to explore the colorful Caribbean undersea world. Are you interested in going snorkeling in Puerto Rico? Then this guide will tell you what places to visit!

Puerto Rico water generally offers great visibility of from 45-65 ft (14-20 meters) in the majority of places. The conditions to go snorkeling in Puerto Rico are the best outside the rainy season (runs from May to October) that is hot and muggy.

Between August and October there is higher probability for tropical storms and hurricanes too, so the safest is to plan your Puerto Rico snorkeling expedition before or after this period.

Water activities are the best between December and March that is the least rainy. If you are planning to stay along the east or north coast, the most ideal months are January, February and March, while along the west and south coasts from December to March.

Generally, the waters on the south side of the island fronting the Caribbean Sea will be calmer with better visibility than the northern and north-eastern sides that face the Atlantic Ocean’s rougher currents. The sea is warm enough all year round with temperatures ranges between 79 and 84F (26-29C).

A top Puerto Rico snorkeling spot on the northern coast is Mar Chiquita. The beach is special for its natural pool beaches. It is a distinction that draws in crowds as it lies around only 45 minutes to the west of San Juan, the island’s capital city.

Mar Chiquita’s waters are a combination of turquoise and emerald green with excellent snorkeling thanks to the variety of fish that frequent the water here. While there may not be coral to speak of, swimming with the schools of tropical fish is a joy all its own. Come during the week or in the winter time to enjoy the beach at its quietest.

A popular Puerto Rico snorkeling spot 1 hour drive from San Juan goes by the name of Seven Seas Beach in Fajardo. This stretch of sand in the shape of a crescent is small and fabulous. Various palm and almond trees provide some shade from the sun as you sit in the soft sand.

A coral reef lies out off the beach and provides a break to the waves. It means that the water is calm and ideal for little swimmers and those just learning to snorkel. As a Blue Flag Beach, this is a well-maintained location.

The little reef provides some interesting Caribbean fish to observe. Along the way to the reef lies a sea grass field that hosts many different submarine fauna including conch and sea cucumbers. A little coral lies along the far left of the beach when you face the water as you swim out from beyond the rocks along the beach.

Steps Beach is officially known as Playa Escalera Reserva Marina Tres Palmas and offers hands down the best snorkeling in Rincon Puerto Rico. The beach gets its popular nickname from the concrete step ruins that sit in the sand.

This pretty Puerto Rico snorkeling beach provides underwater explorers with the opportunity of observing various marine species in shallow (~30ft/9m) deep water. Visitors can also enjoy the many surfers practicing their craft and the fantastic sunsets that cap off an exhilarating snorkeling day. The beach conveniently offers both drinks and food on-site too.

The natural pools formed by the water hitting the coral walls add some interest and a cool spot from which to take in the surfing action. It is a must to bring protective water shoes here because the rocks are slippery and there are sea urchins in the water!

When you are looking for an ideal place to go snorkeling in San Juan Puerto Rico, you need look no further than Escambron Beach. This nature preserve area park is interesting for its tall shady coconut palms leading through the park that is full with snorkeling locations, fantastic food, and a breathtaking view of both the modern San Juan and Old San Juan.

You can do not only snorkeling, but also biking and walking in the expedition the park that offers many green places ideal for the kids to enjoy. The proximity to San Juan makes for a fun afternoon or evening afterward.

Protection by the coral reefs means that the beach is perfect for snorkeling and for taking in some of the beautiful submarine flora and fauna and the best is that you can swim with turtles! After you finish an exciting snorkeling run, you are only a mere five-minute stroll from both food stalls and restaurants.

Snorkeling in Puerto Rico does not get much more memorable than at this iconic and almost-unique location. Thanks to its many little coves formed by mangroves there are calm channels to snorkel through.

Moreover, if you sign up for a La Parguera snorkeling tour that will include a world class bioluminescent tour opportunity too! After the sunset snorkeling in the reefs, and exploring the various coves scattered throughout La Parguera, they will take you to the bioluminescent bay if the conditions are good to observe the blue glowing planktons!

Isla Culebra, also known as Snake Island, Isla Chiquita (Little Island) and Última Virgen (Last Virgin Island, due to its geographical proximity to the Virgin Islands) is an island about 17 miles/ 27 km east of Puerto Rico. It was a US Naval base until 1975 and somehow stayed under the radar. Now, it is famous for its fantastic natural beauty above and under sea that everyone can enjoy who walk the extra mile and visit it.

More than 20% of Culebra and its surrounding waters is nature reserve and national wildlife refuge offering safe feeding and breeding ground for various marine species including sea birds and sea turtles. This high-level protection and the fact that is pretty difficult to get the island explain why Culebra beaches belong to the top snorkeling spots in Puerto Rico.

It is true that the island enjoys more popularity since one of its beaches, Flamenco was mentioned among the best beaches of the world, but it still possible to lounge around without feeling crowded. If you want to see vibrant underwater landscapes, make sure to go snorkeling in Culebra when in Puerto Rico!

Like Culebra, the island of Vieques was occupied by the Navy too until the early 2000s therefore it has no well-developed infrastructure but pristine beaches and wonderful coral reefs full of marine life.

While exploring Vieques snorkeling places you can most probably tick the box ‘snorkeling with turtles in Puerto Rico’ on your things-do-list since the island’s pristine water are home to many sea turtles. Even better, various ray species and also nurse sharks can be spotted here!

For those staying near Ponce, the stunning Coffin Island is not a thing for snorkeling enthusiasts to miss. It lies eight miles (13 km) from the coast. Thanks to the 1700s French author who observed that the shape of the island looked like a cadaver within a coffin the name has stuck. An enduring legend of it being a haunt of pirates persists.

To get out here you need to book with one of a few different day trip outfits or take the ferry from La Guancha Boardwalk. The natural reserve island includes hiking trails, incredibly beautiful beaches, a cave, and a light house. Local Pelican Beach earns the distinction of being a Blue Flag Beach.

For coral reef snorkeling it is best to go with the day trip expedition that will take you to the island’s northeastern side which is known as a good spot to swim with turtles in Puerto Rico since Coffin Island is home to a protected sea turtle population. Tour operators provide equipment but make sure you bring your own snorkel set since usually they do not have the best quality equipment.

Gilligan’s Island is a 5 -minute boat ride from Guanica and is primarily covered in winding mangroves. The islet does include several tiny beaches covered with sand though. To the island’s northwest a cordoned-off area allows for safe swimming that is marked by buoys so motorized boats do not harm anyone snorkeling or swimming here.

The absence of life guards means that you should swim at your own risk as you take in the beautiful coral formations. Thanks to the remote nature of the island, its waters are pristine as well as warm, shallow and calm offering safe conditions to go snorkeling in Puerto Rico for kids and beginners.

Mangrove channels are fun to snorkel through as you take in the sandy bottom and small schools of colorful fish here. Picnic tables and pavilions mean that you can pack food and have a barbecue thanks to the BBQ pits found along the island’s north side. Our tip is to go to Gilligans Island not on the weekend but during the day so very likely there will be only a few people around.