Home » Blog » Things To Know About The Coral Triangle 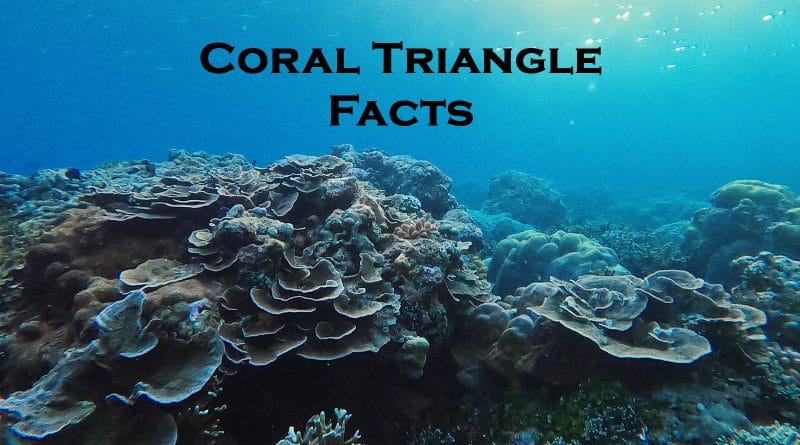 A triangular shape area in the Indonesian-Philippines and Southwestern Pacific Regions, the Coral Triangle is known for having more coral and reef fish diversity than any other place. The region has an outstanding economic value and its natural resources supporting the livelihood of 120 million people. These extraordinary coral gardens are considered the healthiest in the world and attract thousands of diving and snorkeling enthusiasts every year.

Where is the Coral Triangle?

The triangular marine area that makes the Coral Triangle lies in the western Pacific Ocean occupying only about 1.6% of the world’s oceans but referred to as the epicenter of marine biodiversity.

This 6 million km2 area includes the waters of:

Why is this area so diverse?

There are many facts that explain the region’s extreme biodiversity. One reason is that the array of habitats including volcanic islands, rocky beaches, sandy shores, and mangrove forests made the marine species here to adapt to a wide range of conditions.

The other explanation comes from the geographical situation. Since the Triangle sits where the Pacific and Indian Oceans overlap, species from both bodies of water colonize the reefs, moreover the currents bring in other species from other regions, like The Maldives too. This phenomenon is not only increasing the number of marine creatures living here, but their mixing forms new ones too.

On top of this, because of this complexity the Triangle’s coral and fish species are more resilient against climate changes and there is a chance will withstand the impacts better than the world’s other reefs.

Facts about species in Coral Triangle

Giving home to about 30% of the world coral reefs, the tropical waters of the Coral Triangle are unique from various aspects:

Why is the Coral Triangle endangered?

Unfortunately, like all over the world, the coral reefs here are also in danger and most threats are caused by humanity. The current level of fishing and the used methods such as dynamite fishing, bycatching are not sustainable and destroying not only the fish population, but also the reefs.

Climate changes related effects are the other main problems in the Coral Triangle. Warming sea temperatures and ocean acidification cause coral bleaching. This happens because the reef-building algae cannot survive if the water is acidic or the temperature is too high for a longer period, so they leave the coral skeleton making the reef dead.

The increased number of tourists also poses a potential risk to the area. Mass tourism puts pressure on nature from several sides: it makes unregulated coastal developments are more likely to happen as well as causing direct and indirect environmental damages.

Plastic pollution and toxic chemicals found in sun care products are just some of the most known threats that lead to habitat degradation, but we can’t forget about extractive industries (gas, oil and mining) that pollute these fragile underwater ecosystems and killing marine species.

These problems are already happening not only in this region but worldwide and causing irreversible damage if serious actions are not taken immediately.

No matter where you travel in the area, you will find colorful corals and rich marine life in each country that belongs to the Triangle, but there are certain regions that offer outstanding snorkeling experience. If you want to experience the world’s healthiest reefs, add the following places to your bucket list!

Raja Ampat is one of the most beautiful island chains in Southeast Asia, off the west coast of West Papua. It includes four main (named after the four kings who ruled each of the four large islands, Misool, Bantanta, Waigeo, and Salawati) and over 1,500 smaller islands. With jungle-covered islands, white-sand beaches, turquoise lagoons, caves and tiny islets, crystal clear water, it is definitely the heaven on earth and one of the best places for snorkeling in the Coral Triangle.

Raja is often referred to as the Kingdom of Coral because of its seriously impressive marine diversity where you can snorkel over magnificent reefs around many of the numerous small limestone islands and islets. One of the best things about Raja Ampat is the abundance of healthy reefs that can be found in shallow water.

On the east of Flores in East Nusatenggara in Indonesia, the Alor Archipelago that consists of 20 islands is famous for its fascinating reefs. There are about 50 dive and snorkel sites stretching along the Pantar Strait making this extremely diverse area a paradise for underwater explorers and also photographers due to the wide variety of colorful fish that live here.

Alor is not as popular yet as the neighboring Komodo, therefore it takes some extra effort to get there and tourists may experience the disadvantages of being in an undeveloped area, but those who walk the extra will experience some of the best snorkeling in the Coral Triangle with vibrant reefs and encounter large pelagic species.

Komodo is Indonesia’s most iconic and most visited national parks between East Nusa Tenggara and West Nusa Tenggara consisting of 3 larger (Komodo, Rinca and Padar) and 26 smaller islands that got famous for the Komodo Dragons. It was created in 1980 and since 1991, it is a UNESCO World Heritage Site.

Although the Komodo National Park was established to protect the world’s largest lizard, but the park offers extraordinary landscape and fantastic underwater attractions too thanks to the strong daily tidal flows bringing nutrients from the depths of the Indian Ocean.

Turtles, sharks and manta rays are the main attractions here along with 1000 tropical fish and nearly 300 coral species. Even better, one of the rarest marine mammals, dugongs also live here, although you need to be very lucky to encounter one.

Wakatobi is a chain of atolls and islands off the south-east of Sulawesi, about 2 hours far from Bali by plane and certainly of the best places for snorkeling in the Coral Triangle. Idyllic white sandy beaches and water activities such as kayaking and paddleboarding await visitors who come here for a relaxing yet active vacation.

The reefs here are considered some of the healthiest not only in Indonesia but probably in the whole world. Shallow coral gardens offer endless snorkeling, while the jaw-dropping vertical walls full of sea life provide fantastic diving opportunities.

With an outstanding variety of species from nudibranchs through blue ring octopus and sea snakes to blue whales, Wakatobi is definitely like an aquarium and a real underwater paradise!

People say that when diving or snorkeling in Bunaken, you can see70% of all fish species that live in the Indonesian waters and almost 400 coral species. This marine park in the north of Sulawesi was established in 1991 as one of the first marine reserves of Indonesia and covers a total area of 890.65 km².

Marine life can thrive here thanks to the constant currents that provide a steady stream of nutrients. The outstanding fish and coral variety and crystal clear, warm waters make Bunaken one of the top 10 dive sites of our planet. Although, due to its location right on the equator, a trip here needs planning to avoid the monsoon season.

Give your iPhone 13 high-level protection against water, rain, dust and dirt! Get a waterproof case now!