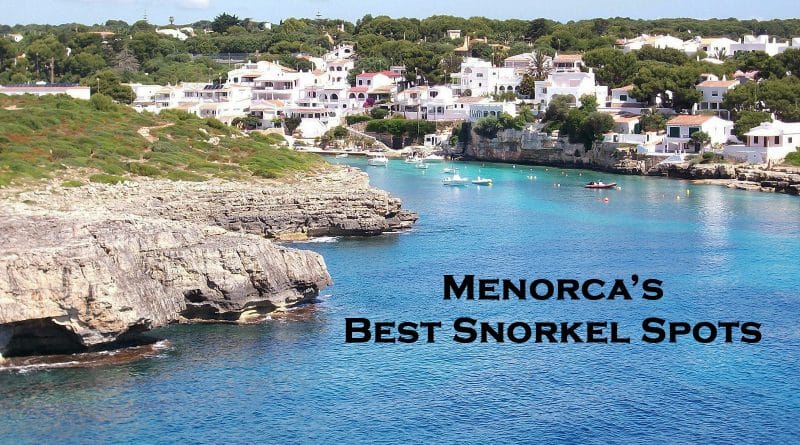 Menorca is one of those hidden gems owned by Spain and found in the Balearic Islands. Due to its laid back and calm ambience all over the little island, Menorca (or Minorca) could just be the Mediterranean’s perfect destination if you seek out a relaxing family holiday or an adventurous getaway with your friends. Here, peace and quiet and amazing natural beauty prove to be the primary attractions for visitors and locals alike. Moreover, many sections of the island provide an unspoiled and practically untouched setting for water activities. When you are looking for the best places to go snorkeling in Menorca read on to discover them!

Cala Mitjana proves to be among the most incredible beaches, and also considered one of the most popular places to go snorkeling in Menorca. Traveling here is easy: from either Ciutadella or Mao you need to follow the signs to Cala Galdana and take the detour on the left.

In the high summer season, you will see the cars parked across the roadside. Once upon a time, you could park a mere 100 meters from the beach itself, but now this has been changed. You should expect a good 10-minute-long walk from your parking to the beach now.

Cala Mitjana has a primary feature of being a long stretch of sand. It also boasts an oddly large bathroom and shower area. The size of the beach means that you can always find a place to spread your towel even when the beach is commonly crowded in the summer months. From Mitjana it is easy to access most of the less crowded beaches of the south of Menorca, such as Fustam Cala, Cala Trebaluger, and Cala Escorxada that are also among the best places to snorkel in Menorca.

Cala Morell lies along the north in Menorca. It is nicely protected and ringed by encircling cliffs. The beach lies close to Cala Morell town and in fact, is really near to the Cala Morell famed necropolis.

Although the actual beach is small and only runs for about 50 meters, it is an idyllic spot to enjoy the sun and sea. There are platforms designed to hold your towel and personal items while you swim. Despite the limitations of these facilities, Cala Morell is still one of the best places for snorkeling in Menorca in the island’s north. The sides contain rock covered bottoms replete with marine life. There is also an area that is sandy where many different kinds of fish will abound.

Getting here is easy by car, bus, or even bicycle. The distance is farther as the beach lies the farthest away from the main two cities. If you want to catch a bus, get the 62 out of Ciutadella or Algaiarens. Arriving by car, motorcycle, or bicycle needs you to travel towards Ciutadella then follow signs pointing to Cala Morell.

For a one of a kind cove, try Cala Rafalet. It lies just outside of the resort town of S’Algar and is covered in rocks in many places. A downside is that the beach here is tiny and has little room for sunbathers, yet it remains popular among snorkelers. The fact that the TV commercials for Estrella 2010 (one of Spain’s beloved local beers) was filmed here also adds to Cala Rafalet’s popularity.

Getting to the beach requires you to drive towards Mao and then follow the urbanization in s’Algar. Arriving in s’Algar, you need to head towards Cami de Cavalls along the section 19 trail.

Within the nature preserve on the south coast lays the beautiful Cala Macarella. This is widely regarded as perhaps the most stunning beach not only in Menorca and the Balearic Islands but perhaps the whole of Spain. The cove is not developed and also not too large. It is surrounded by pine trees hugging the cliffs.

Immediately next to the beach are wetlands that sea turtles and eels call home in this canyon. It helps the beach to boast a wild feeling. The sea water clarity here (as in most of Menorca) is simply stunning. Pine trees give an aromatic smell to the air. The area is laid back that provides ideal conditions for a Menorca snorkeling tour.

Menorca’s south coast boasts some of the very best snorkeling in Menorca with good reason. Cala Galdana is one of these exceptional beaches with its golden colored sand sloping easily into the pristine clear waters of the Mediterranean Sea. With shallows, calm and clear waters, this place is highly recommended for families with small kids too.

The beach offers several restaurants, bathrooms, and shower facilities. One of the island’s best hotels, The Melia is also found here along the beach.

The north of Menorca hides an unspoiled gem called Cala Pilar. This is hard to get to sandy stretch found along the way from Ferreries to Ciutadella. When you travel from Ciutadella along the island’s main road leading to Mao, you want to exit at the Cami de Pilar found at Kilometer 34 on the road. The exit is not well marked so you should look closely when you near the marker. Be warned that the path from the parking area is a solid 30-minute walk through a lovely forest down to the beach.

Along with the majority of the northern beaches, Cala Pilar boasts a strange red colored sand.
The wind conditions are favorable for snorkeling and the water is immaculate. The waves here can be really high though, thanks to the occasional Tramuntana (or winds from the North). You should ensure that no wind is blowing out of the north as it will create huge waves and a large build-up of dirt along the beach shores.

Along Cales Coves is an amazing gem called Cala en Porter. The beach may boast coarse sand, but the views of the bay are stunning. Getting down to this beach is an effort, but well worth it. It requires a shorter walk following a steep gorge of limestone. The road that leads here from Cala’n Porter and Sant Climent runs for around a mile in length and is treacherously bumpy, yet it is well worth the efforts.

Besides the obvious appeal of the snorkeling here, there are several other world-class attractions. There are ancient burial caves and a necropolis that dates back to 9 B.C. The beach also boasts over 100 prehistoric caves that have given it an international reputation. You can reach a number of them by climbing over the cliffs on the footpath that leads to a second cove. These caves lying high up along the gorge walls make for an exciting exploration of the area for adults and children alike.

Cala Pregonda is one of the most beloved beaches on Menorca found in the north. It is unusual from the other beaches in the area as its sand varies from golden yellow to red. It is bordered by several islets that protect it from the waves. The water lapping the shores here is so pristine and clear that makes you feel you are not on the same island. Cala Pregonda also has the distinction of having been used as the cover photo for not one, but two different Mike Oldfield albums.

Reaching this beach requires you to take the main road from Es Mercadal down to Fornells. Several miles later (or kilometers) before you arrive in Fornells, you exit on the turnoff that leads to the beach of Cavalleria. From here you simply follow the well-marked road signs that lead to Binimel-la. Parking is free here.

Cala Son Xoriguer, that is joined with the modern resort of Cala’n Bosch is getting more and more popular as a family holiday destination and considered simply the best place for snorkeling in Menorca by many. There are loads of fish in the turquoise color water, crabs and octopus hiding between the rocks and also small caves to dive in. You can simply walk on out into the water and snorkel right off of the beach without effort.

Back on the sand, the beach is beautiful and near the marina. Accommodations and restaurants are also close here, moreover plenty of shops and small grocery stores.

If you wish to explore a superb beach, don’t miss out visiting Cala Tirant. The water here is so shallow as you can walk out about 15 meters, so it is perfect Menorca snorkeling spot to take kids. When the sea is nicely warm and clear, the experience is fantastic. Hint: there is a lagoon behind the river where you can see turtles!

Ibiza snorkeling guide – Where to go & what to see