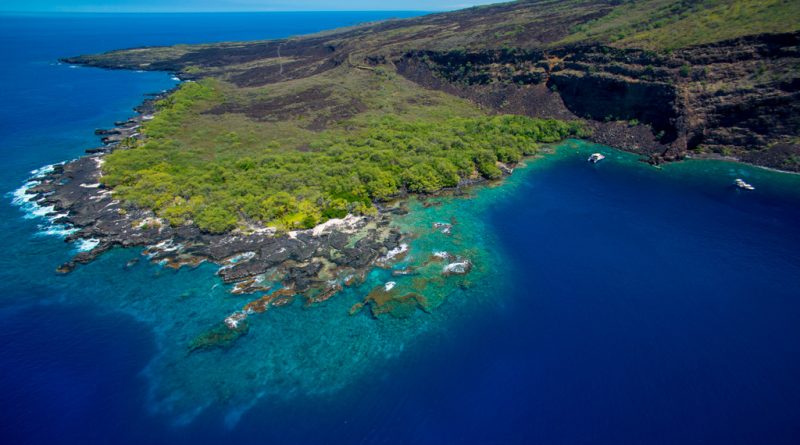 Located on Hawaii Island’s south coast, Kealakekua Bay is home to Hawaii’s only underwater state park and some of the last thriving reefs. Kealakekua Bay has become known as one of best snorkeling destinations throughout the Hawaiian Islands. Experience Kealakekua Bay with Fair Wind Cruises family owned business who offer fun adventures through to luxurious yachting trips.

The bay’s waters are full of life and unique things to see. Schools of vibrant tropical fish play hide and seek among techno-color coral architecture and dark fingers of “pillow lava”. Kealakekua Bay is home to marine life found nowhere else in Hawaii such as the flame angelfish and lizard fish. On occasion, you can even see spinner dolphins, Hawaiian green sea turtles and Hawaiian monk seals swimming in the bay.

Don’t forget, you can’t use oxybenzone or octinoxate containing sunscreen in Hawaii that are harmful for the corals. See what are the recommended reef safe sunscreen brands!

The bay holds cultural and historical significance. Kealakekua means “the pathway of the gods” in Hawaiian. It was in this special place that thousands of ancient Hawaiians gathered for an annual celebration honoring their fertility god, Lono-i-ka-makahiki during what is referred to as the makahiki festival.

Not only is the bay home to immaculate snorkeling conditions and cultural significance, the bay is also home to the famous Captain Cook monument. When Captain Cook made his second landing in Hawaii, he arrived at Kealakekua Bay during sacred makahiki festival. Native Hawaiians confused him for the return of their fertility god Lono-i-ka-makahiki. They soon realized he was not a Hawaiian God and lost respect for the traveler. A series of unfortunate events lead to the untimely death of Captain Cook at Kealakekua Bay. The British established the Captain Cook monument in memory of the site where Cook was killed.

The best way to access the magic of Kealakekua Bay is aboard a Fair Wind Snorkel Cruise. Since 1971, Fair Wind Cruises has been the official ocean adventure company to experience Kealakekua Bay and the South Kona coast. The family-owned business are also seen as stewards to Kealakekua Bay.

Media and text courtesy of Fair Wind Cruises. If you visit this area, join their snorkel trip for the best snorkeling experience!