Home » Blog » Lionfish invasion – What’s the problem with this fish? 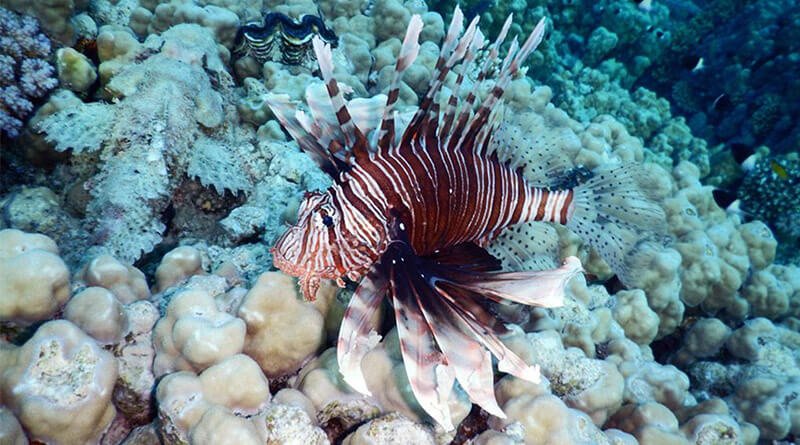 Lionfish invasion became a problem lately that causes serious damage to sensitive marine ecosystems. But do you know exactly which areas are affected and why are these species a threat to other ocean fish? Read the truth if lionfish are really that dangerous or just got a „bad marketing”?

Lionfish invasion – what areas are affected?

Lionfish are native in the Red Sea, Indian Ocean and in the Southern and Western Pacific Ocean. In these regions, we can’t talk about lionfish invasion because their natural predators (sharks, groupers, eels, cornet fish, frogfish, scorpion- and triggerfish) keep their population always in balance. Lionfish are invasive species where they are non-native including the Caribbean Sea, Gulf of Mexico, Western Atlantic Ocean and recently they appeared in the Mediterranean Sea and were reported from Cyprus, Italy as well as around Malta beaches.

The invasive species are the Red Lionfish and the Common Lionfish/Devil Firefish. These species are originally from the Indo-Pacific region and from the Red Sea. Sightings are very common for example while snorkeling in Egypt especially after sunset when they become active and start hunting. The first documented lionfish in the USA is from 1985 when a local fisherman found a Red Lionfish in a crab trap in Florida. There are unconfirmed stories of sightings from the early ’70s as well.

Tip: If you want to learn more about the species you can see while snorkeling, buy yourself a reef fish identification guide!

How did lionfish get into other regions?

There are more theories about how did these fish get into the Western Atlantic Ocean. Some people say that a private aquarium was destroyed by a hurricane, others state they were transported in by ships. Most scientists agree that the lionfish invasion started from a home aquarium. Somebody simple disposed the fish into the ocean somewhere around Southeast Florida and the currents spread the egg masses. Nowadays the species spread across the US Atlantic coastal waters and are present from Rhode Island to Brazil creating an ecological disaster in the region.

How lionfish affect the ecosystem?

The native lionfish are ecologically important, they help to maintain the health and balance of coral reefs. But in the areas where they are non-native, lionfish invasion impacts affecting over a hundred million people by destroying natural marine ecosystems. The females can release up to 2 million eggs a year, they breed faster than rabbits. They are sexually mature at 1 year of age and can live 15-20 years. They eat over half the size of their own body, their stomach can expand up to 30 times the normal volume. Scientists mentioned over 70 species that they eat. Small fish, invertebrates, crabs, octopus, squid, lobster, seahorses and shrimps are on their menu. The lionfish invasion can destroy whole ecosystems by reducing native marine creatures by 80-90% in just 5 weeks.

In the affected areas scientist tried to train local fish to hunt lionfish but the attempts failed. They noticed if the hunting is not their natural habitat they might become aggressive towards other species as well as humans resulting in an even catastrophe than the lionfish invasion. It seems that the only successful control method for lionfish is reducing their number by trapping, fishing or hunting. In many Caribbean locations, there are local initiatives that organize lionfish hunting. For example, the Aruba Lionfish Foundation volunteers remove thousands of lionfish every year to protect Aruba beaches and coral reefs from the disaster these species can cause.

Eat lionfish to stop the invasion

Many people think that lionfish is poisonous but in fact, it is safe to eat lionfish! It has very mild white meat that can be prepared in many ways as sushi, sashimi, in soup, fried or baked. There is no poison in the flesh of the lionfish meat at all. They are high in Omega 3 fatty acids, low in saturated fats and heavy metals. Eating non-native lionfish is good for the environment and it means you support the local fishermen also There are more and more restaurants that serve lionfish or you might find recipes on the internet as well.

How poisonous is the lionfish?

What to do if you get stung by lionfish?

If you get stung by a lionfish, you will feel the following symptoms: intense pain, redness, and swelling. It also could cause allergic reactions as well as dizziness or in extreme cases temporary paralysis. The pain may last for several hours, the duration of symptoms depends on the amount of venom got into the body and how deep the spine punctured. But for healthy adults, the lionfish poison is just painful, not deadly. For your own safety, end your snorkel or dive session as soon as possible. Remove the spines and apply hot water on your skin. Applying clean cloth soaked in hot water is the most effective. Do not apply ice or cold compresses, they will make the pain worse. Home remedies like vinegar, baking soda or urine are not effective against their toxins. If you can’t handle the situation, ask for medical assistance!

"Disclosure: This article may contain affiliate links. If you decide to make a purchase, I'll make a small commission at no extra cost to you."